Dave Barclay, chief puppeteer of “Return of the Jedi,” reveals what made Jabba the Hutt’s tongue so slimy and confesses to almost strangling Princess Leia

Puppeteer and animatronic designer Dave Barclay, who is appearing at Granite State Comicon in Manchester on September 17-18, has poured his heart into some pretty famous “Star Wars” body parts over the years. In “The Empire Strikes Back,” he controlled Yoda’s eyes, and later he became the jaw and right arm of Jabba the Hutt in “Return of the Jedi.”

Also appearing at Granitecon will be the Star Wars cosplayers of the 501st New England Garrison and the Alderaan Base, who will pose for photos with convention attendees at their Death Star trash compactor backdrop. Donations to the Dana-Farber Cancer Institute will be collected to honor cosplayer Justin Manning, who recently died from cancer.

The 501st and Alderaan Base groups brought a life-size homemade Jabba the Hutt sculpture to Granitecon in 2013, but have since donated it to the Rancho Obi-Wan, a nonprofit Star Wars fan museum in California.

New Hampshire Magazine recently caught up with the right half of the real Jabba the Hutt for a Q & A from his lair in California.

DB: Both CGI and animatronics are tools to bring a character to life. When we were doing “The Empire Strikes Back” and “Return of the Jedi,” we didn’t have any other options. The benefit of animatronics is that it’s right there in front of you on the set – and you get a sense of performance and soul in the character. And, if it works in that moment on camera, you know you’ve got that performance. 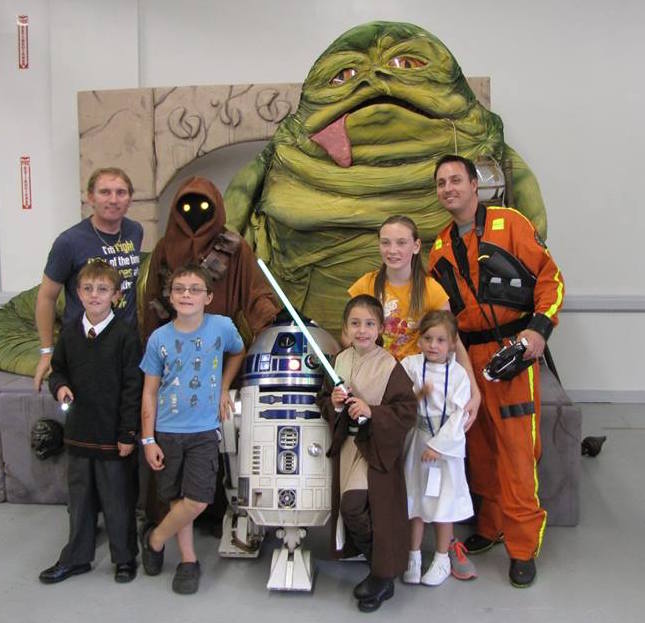 In 2013, the Radisson Center of New Hampshire in Manchester had a special visitor.

With animation, you can work and work and work until it’s perfect, but there’s still something unreal about CGI animation. It’s gotten a lot better over the years and looks pretty amazing now, but, for me, it’s really about the performance and portraying a character on screen. Now, it’s really 50-50 as to whether animatronics or animation works the best.

In “Force Awakens,” I loved the BB-8 droid. That’s an example where you’d think it’s the perfect opportunity for CG animation – it’s a sphere and a half-sphere, it doesn’t get any simpler than that. But instead, they had BB-8 on the set with two puppeteers performing him. And it was the soul of the puppeteers and the interaction live at that moment that made BB8 such an amazing character for me. Because he’s actually there, the other actors can relate to him.

NHM: Do you see any danger of puppeteers becoming obsolete?

DB: Absolutely. In the last 15 years, the work in movies has definitely declined. There’s a lot of work for my friends in London working on the “Star Wars” films – that’s because director JJ Abrams wanted to capture the flavor of the original trilogy. So there’s a bit of a revival in animatronics in that small world, but generally CGI animation has replaced a lot of us.

NHM: What was the biggest challenge for you to mechanically operate Jabba in “Return of the Jedi?”

DB: Initially, it was the coordination between performers. I was chief puppeteer and on my left side sat Toby Philpott, my co-pilot. I did Jabba’s right arm. Toby did Jabba’s left arm – and between us, we controlled his head. I did the jaw and the voice. Toby moved the head around, and, between us, we moved the body. We had to coordinate our bodies to make Jabba’s body move.

One of the issues was where we were positioned inside Jabba. We couldn’t reach each other’s hands – my right hand couldn’t touch his left hand – so grabbing hold of the chain together and pulling in Carrie Fisher was extremely tough to do. First, we couldn’t see anything – we were completely blind in there – and we couldn’t coordinate our hands. So we had to figure out a way to pull Carrie in without strangling her. Those were real chains around her neck, so we had to be really careful because there were no safeguards.

NHM: So you were the voice? You’re responsible for Jabba’s cutthroat personality?

DB: Well, for when we were on set, I spoke Jabba’s lines and ad-libbed in English. When we went into post-production, they dubbed in a fake language, “Huttese.”

NHM: Any memorable stories from when Princess Leia was wearing that infamous slave bikini?

DB: In one of the scenes, there’s a sequence when Jabba’s tongue comes out of his mouth and he’s going to lick her and she’s really grossed out. On the first take, Carrie Fisher felt too comfortable with us, and director Richard Marquand wasn’t getting the performance he wanted. So he said to us (through ear pieces) to try to lick Carrie with the slime-covered tongue. So we did, and she freaked out. We couldn’t use that take, but, on the third take, Jabba’s tongue came out and she thought she was going to get slimed again!  Carrie had such a genuine grossed-out reaction that made it into the film.

NHM: What was the slime made out of?

DB: Methyl cellulose. It’s what they use for gunk and goo in the film industry. It’s a lot like wallpaper paste.

NHM: At comic book conventions, do you see a lot of Jabba and Leia couples costumes?

DB: Mostly we just see Slave Leia costumes. Occasionally, you’ll see a Jabba, but he’s such a huge character to take on for cosplay. 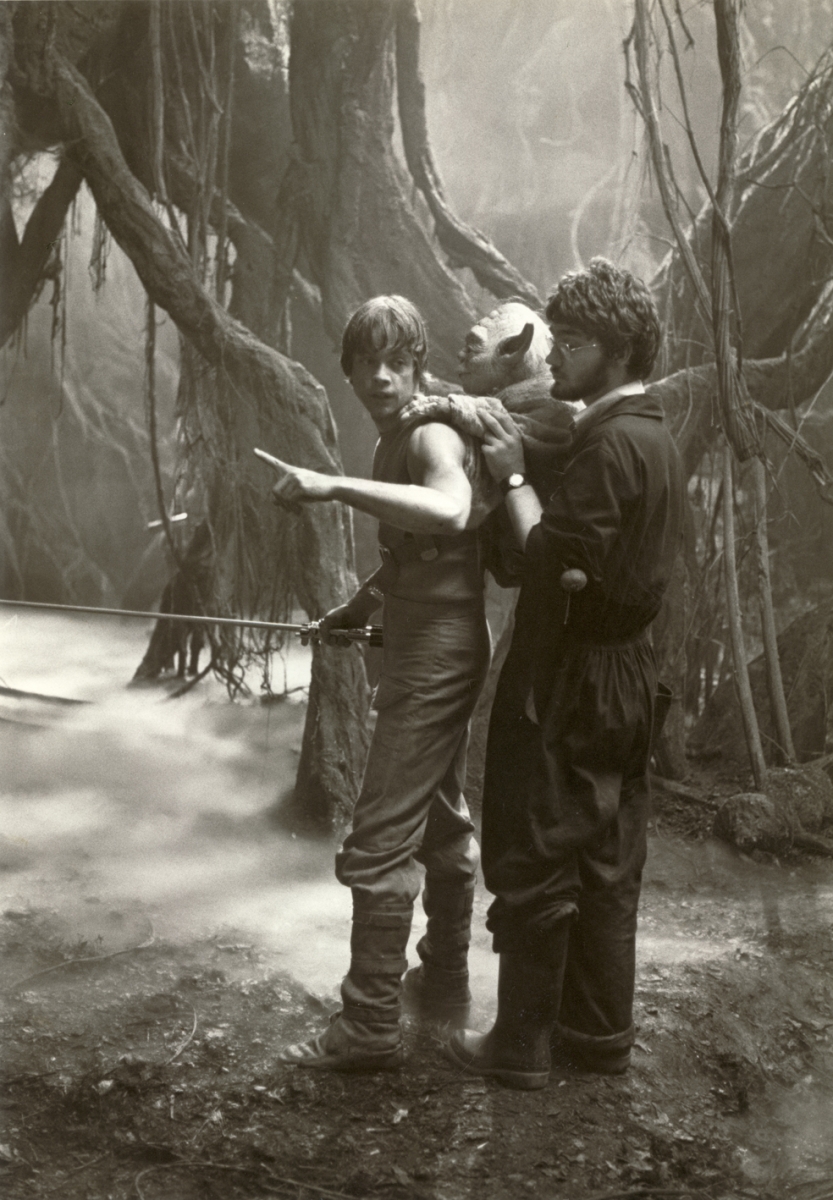 Puppeteer Dave Barclay on the set of “Empire Strikes Back” with actor Mark Hamill.

NHM: Let’s talk about Yoda. How many people did it take to run that puppet?

DB: Initially, it took four puppeteers to control Yoda on “The Empire Strikes Back.” I was in charge of his eyes.

NHM: You got to be chief puppeteer for Yoda for a week when Frank Oz had to take care of some Sesame Street-related business. When you see the movie now, has the novelty worn off, or do you still feel excited about having done that?

DB: I was 19 years old and did the best I could to match Frank. I was controlling Yoda in the scene where Mark Hamill was doing a handstand and Yoda is standing on his foot and says “CONCENTRATE!” I started out as a fan and still pinch myself realizing I got the opportunity.

NHM: Why do you think “Star Wars” still is attracting new generations of fans 40 years later?

DB: The original trilogy had this classic hero quest. The stories and the ideas and history are so deep with Ralph McQuarrie’s designs and everyone’s involvement in all the different crafts. It’s so tactile and feels so real – it’s an emotional and satisfying journey for everyone. Hopefully, they’ll keep producing Star Wars films for many more decades to come!