Spunky the Frog – A Conway Legend 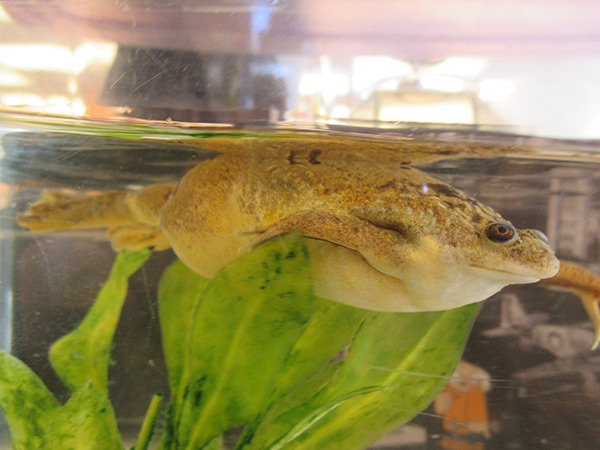 After a long cold winter, the chirping sound of a Spring Peeper is like a one arm slot machine hitting a jackpot.  A rush of hope shoots through your body and you begin to recall what warmth once felt like. While Spunky the frog at The Toy Chest, Conway is not a peeper, he does get a lot of looks. A couple of years ago Daren and Melanie Levitt bought the Conway landmark and Spunky was part of the package.

Is Spunky a real frog?

“Yes, he’s been on our counter for almost 21 years, this May is his 21st birthday and because he’ll be legal, we will probably have some sort of celebration. He lives underwater and while his eyes are open, he’s blind. People think he’s rubber because he just doesn’t look real.

Where did he come from?

“Spunky arrived in Conway over twenty years ago, as a pet tadpole. There’s a company that sends you a tadpole in the mail. You get to watch them turn from a pollywog to a frog. It’s great for kids to learn the science involved and it’s pretty low maintenance,” Levitt says. “He eats frog flakes.”

Do people come to see him?

“Oh gosh yes. He’s a Conway icon.  You can always tell who has been loyal to the store, people come in who remember him from when they were children and now they bring their own children and ask for him.

Does he have a personality?

“He's twenty years old, he sleeps quite a bit. Sometimes he gets swimming around and lets out a croak or a little song. He’ an old man, but once in a while he’ll have a burst of energy.

Do you still sell the kits?

“Do we still sell them? Of course, they are the biggest seller; you get a kit, frog food and a birth certificate. Then you send a way for the tadpole, it’s a deal. The kit is still $19.95.