For writers, a weekend at an inn where one of New England’s great poets stayed is positively inspiring

As we moseyed up Rte. 153, we saw the sign for Home Again Restaurant, so stopped to investigate. We ordered the seafood platter for two and barely made it through the bountiful plate of fried clams, shrimp, scallops and haddock with French fries and coleslaw. The chowder that night was corn — sweet, creamy and delicious.

Our room at the first landing of the beautiful spiral staircase — the architectural highlight of the Wakefield Inn — was blissfully quiet, so we were glad we’d set an alarm. We wouldn’t have wanted to miss the magnificent Greek omelets overflowing with fresh tomatoes, red onions, tangy feta, black olives and sweet red peppers. As we waited for these, we munched on moist, rich banana bread and fresh-cut fruit.

At the New Hampshire Farm Museum, back down Rte. 153 on Plummer’s Ridge in Milton, Spring Farm Day (happening this year on May 30, 2015) was just beginning. The museum’s two farms were in the same families for generations, and we toured the Jones farmhouse and the barns to see the animals, wagons, sleighs and old farm tools. Special Farm Day activities included dancing around the maypole (a new experience for me), sampling traditional spring tonic, horse-drawn wagon rides and demonstrations of early crafts and farm skills. The shop is filled with New Hampshire-made maple syrup, honey, cheese, soaps and jams, plus old-fashioned candies and how-to books on farm topics.

Since 1974 the same family has operated Poor People’s Pub, just across from the boat landing in the center of Sanbornville, so they must be doing something right. They certainly did right by our lobster roll and turkey sub, made with fresh-roasted turkey.

Several villages string along Rte. 153, in the towns of Milton and Wakefield, including Union. It was once a busy rail depot, as we discovered at the Heritage Park Union museum in the meticulously restored railroad station. Here we found a group of rail enthusiasts building a working HO-scale model of the 1909 railway line and station. The museum contains photographs and artifacts, and we learned that ice harvested from Lovell Lake was loaded here, bound for Boston before the days of refrigeration. Outside is a 1902 Russell Snow Plow used to clear the tracks.

Rte. 153 winds northeast past the beautiful Bancroft estate to Woodman; we turned left to Woodman’s Forge & Fireplace, where we had hoped to see their wood stove museum. But owner Jim Tully explained that it will be closed through this summer while a larger home is built for their collection of wood-burning stoves popular during the 1970s energy crisis. A sampling of these in front of Tully’s office brought back memories of cute little Jotuls with their relief woodland scenes decorating the side panels. The store has more wood-burning stoves than we’d ever seen in one place, and after browsing among the cast-iron pans and stove accessories, we bought a fan for our Glenwood.

Our table overlooked the inn’s gardens and a setting sun that backlit the tulips and bathed the dining room in a warm glow. We shared a big bowl of plump mussels steamed in white wine with parsley and a judicious amount of garlic that didn’t mask the sea flavor. My short ribs were meaty and tender, served with smashed potatoes that absorbed the rich braising juices. The veal saltimbocca was generous and tasty, sauced lightly in Marsala and white wine. After these hearty dishes, we had to pass up the delicious-sounding signature white chocolate bread pudding, finishing instead with piping hot espresso.

After dinner our innkeeper, Colleen Nicastro, told us about the inn’s history. It was built in 1816 for William Frost, who aspired to build the finest house in Wakefield. He did, but his home with a magnificent spiral staircase to the third floor bankrupted him and ownership reverted to the builders. It became an inn in 1890, and a carriage brought guests from the railway station. Nicastro showed us the stagecoach door next to our second-floor room, where trunks were loaded directly from the roof of the coach. In the summer of 1891, poet John Greenleaf Whittier stayed in the bright bedroom opposite our own. 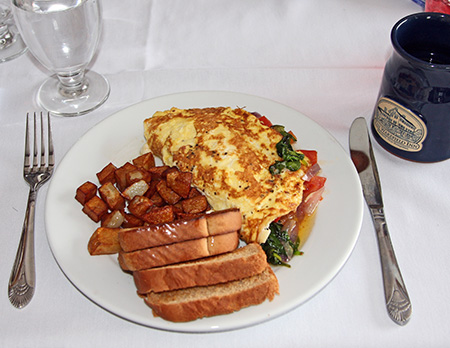 Inviting breakfast omelet at the inn

After breakfast we strolled through the inn’s gardens, redolent with lilacs warming in the sun, and through the hilltop village of Wakefield Corner, a busy place in the late 1700s and early 1800s, when most of the homes in this historic district were built. The elegant library beside the town hall was built in 1894, based on the design of the Columbia University Library. Near the north end of the village, the 1858 red-brick schoolhouse is now the home of the historical society.

After searching out the restored B&M Railroad turntable along the Cotton Valley Rail-Trail, we stopped for late lunch at Miss Wakefield Diner, with its endearing giant moose entryway. We couldn’t miss Sweet Cravings Candy Shop in the candy-pink building next door, where we bought a few treats for the road.