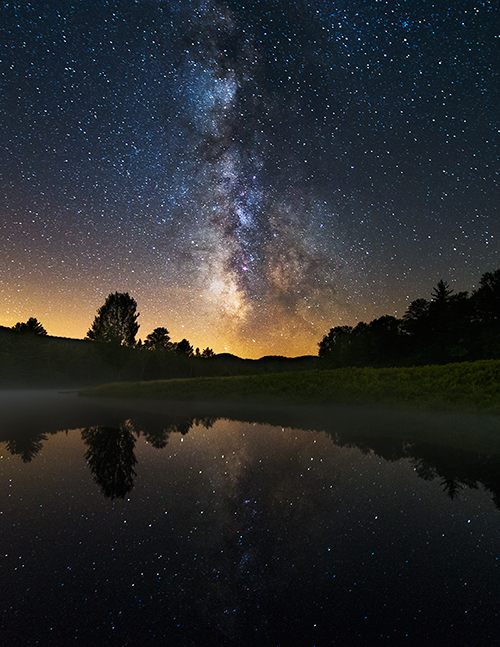 You might recognize this shot from our February 2014 cover. It's the Milky Way Galaxy as seen from Thornton, New Hampshire.

Read more about Christopher Georgia, see his tips on shooting your own night sky photos, learn about some of the best places to stargaze and more in the February 2014 cover story. 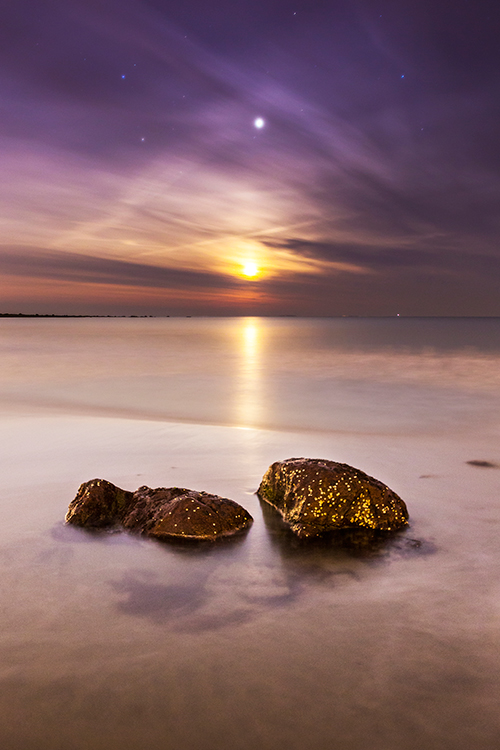 “There is nothing like a moonrise at the seacoast of New Hampshire. While at North Hampton State Park one evening with fellow photographer Josh Blash, I captured this image as the moon and Jupiter rise from the horizon in late December 2013.” – Christopher Georgia. 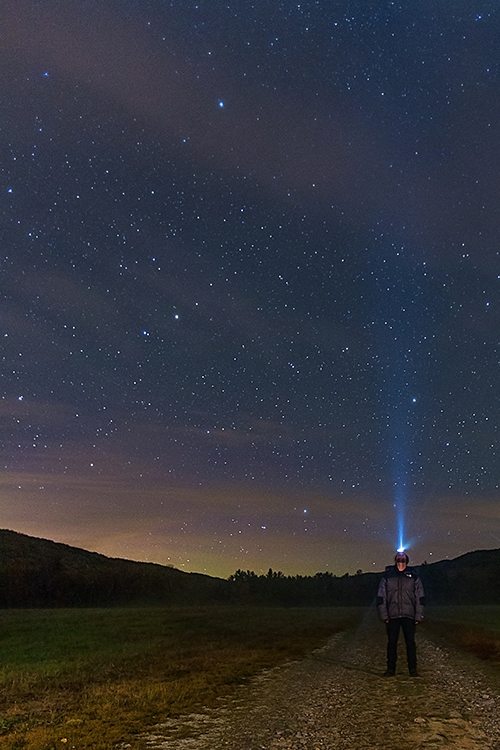 “Chasing the aurora borealis can be a bit frustrating at times. I follow the prediction maps quite regularly, however I don’t always catch a show. On this particular night I was out with a few fellow photographers running time lapse and shooting various compositions of the night sky while patiently waiting for the elusive aurora borealis to put on a show. After a long night and no show we began working on portraits under the stars. Upon arriving home and reviewing the images of the night, I realized there was a very subtle northern lights show happening directly behind me.” 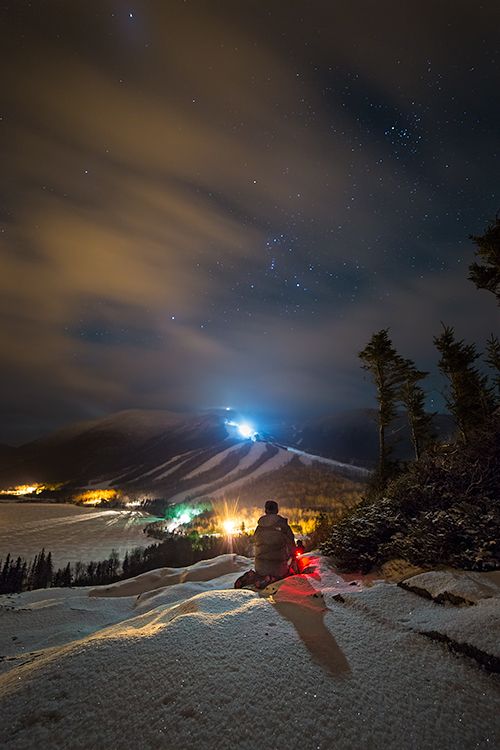 “Fellow photographer and friend Garrett Evans captured this image as I composed a photograph of constellation Orion rising high above Cannon Mountain in the night sky. Artists Bluff offers very nice views of Franconia Notch State Park and is a spot I plan to continue photographing for a long time.”- Christopher Georgia. Photo of the artist by Garret Evans.

“It is very rare to convince friends to hike at night in search of a photograph. Especially when the hike involves Mt. Washington. Fellow photographer Jessie Briggs and I began our early evening ascent during summer solstice in June of 2013. Our destination was the crest of Lion Head, offering a beautiful view of Tuckerman Ravine and the summit of Mt. Washington. This panoramic image was photographed using 13 shots. It was quite difficult to capture this particular image due to the unforgiving 30 mph plus headwind.  I also had to be very quick with the moon setting over Tuckerman Ravine, not to mention the giant moon halo. With a firm grasp on the tripod, I fired away 13, 30-second exposures and stitched them together to create this panoramic image.” – Christopher Georgia. 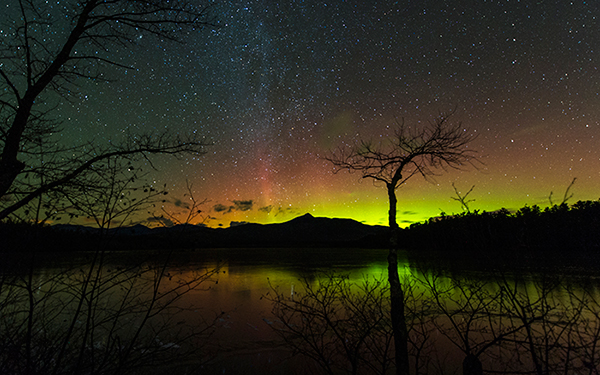 “The holiday lights had just been installed at Cape Neddick Light Station in York, Maine. Fellow photographer Garrett Evans and I decided to go out to see what we could capture. While at Cape Neddick we received word that the aurora borealis could be storming soon. Frantically packing up our gear, we rushed to the car to head north. We found ourselves two hours away from our original destination, back in New Hampshire, photographing the aurora borealis from Lake Chocorua in the middle of December 2013.” – Christopher Georgia. 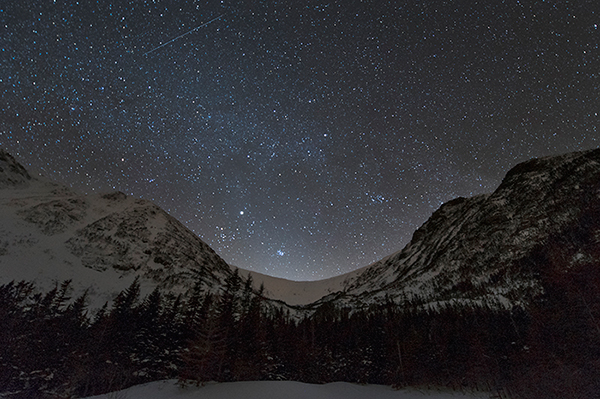 “Tuckerman Ravine has always been a special place to me. Every time I arrive at the Hermit Hut, the scenery puts a huge smile on my face. I returned one winter evening in February with hopes to capture Tuckerman Ravine under the stars. It was a cold night. With temps well below zero and the wind gusts up to 35 mph, capturing a long exposure w hile maintaining sharpness proved to be difficult. After quite a few tries I finally achieved my goal.” – Christopher Georgia. 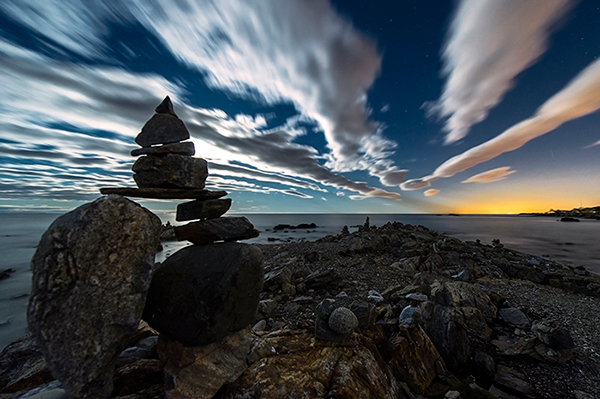 “The clouds forming over Rye are a type of arcus cloud called a roll cloud. These clouds are in the beginning of formation. Later on in the night the roll clouds form in perfectly straight lines, forming the shape of a series of pipes. Roll clouds generally form from sea breeze or in this case the remains of a cold front from a thunderstorm. During the formation of these clouds, the moon continued to rise in the night sky, casting interesting shadows on the landscape from the roll clouds.” – Christopher Georgia. 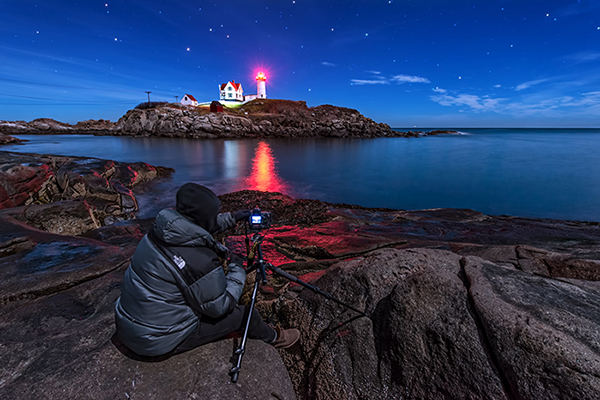 “I met with fellow photographer, Mike Taylor at Cape Neddick Lightstation in early December of 2013 to photograph the famous Nubble. After a long night of shooting, Mike captured this image of my last shot of the evening at Nubble. I set my camera and tripod over a crack in the rocks with waves crashing under me to get the composition I was looking for.” – Photo by Mike Taylor. Description by Christopher Georgia. 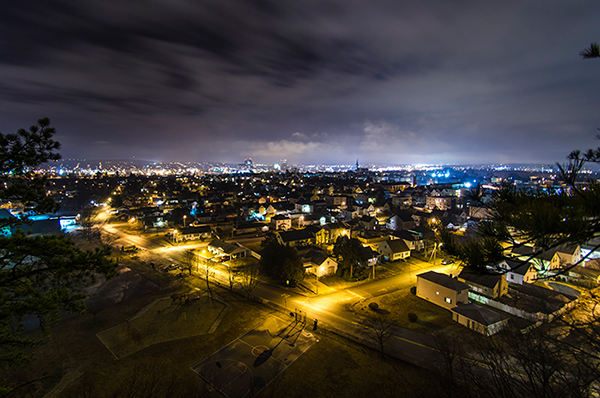 “Manchester is the exact opposite of what I look for in a night sky. Although there are few stars to be seen at night, many beautiful views are to be had under a night sky. This particular view from Rock Rimmon Park over looks the entire city of Manchester. Under a partly clouded sky, the city looks amazing from this vantage point.” – Christopher Georgia.