He had a reputation as a tough taskmaster, but it was Joe Dodge's passion for the White Mountains that drove him

Except for an occasional road crossing and shelter, Lonesome Lake Hut is the first sign of civilization on the Appalachian Trail in New Hampshire since Hanover, 67 miles to the south. The hut — more like a hiker hotel — sits at the south end of eight high-country huts in the White Mountains. For the next 62 miles along the roughest and prettiest section of the Whites, hikers can sleep and eat in relative luxury, carrying just water and a raincoat. And that is due to one tough son-of-a-bitch named Joe Dodge.

The hut marks the edge of the empire mountain legend Dodge built out of sheer muscle and brains during his 51 years in the Whites. In 1922, he left Manchester-by-the-Sea, Mass., and his family’s lucrative furniture business. A decade later he had rebuilt all five huts in the Appalachian Mountain Club System, then built three new ones in some of the most inaccessible plots of land in the Northeast. Between 1927 and 1931, Dodge’s crews of men, burros and in one case a tractor hauled a combined 210 tons of material up the mountains to complete the projects. If the story ended there, it would be enough for a life work. But it doesn’t. William Lowell Putnam closed the introduction to his 1985 biography, “Joe Dodge: One New Hampshire Institution,” with this challenge: “If you didn’t know Joe Dodge, you damn well should have.”

From a young age, Dodge began a lifelong habit of uniting people with their love. Dodge’s son, Joseph Brooks Dodge Jr., said, “The old man ran one of the first private radio stations in the country, call sign W1UN.” When ships were approaching Boston or New York City, they would call the elder Dodge in Manchester, Mass., and ask him to call or telegraph their wives or girlfriends to say they’d be docking soon. “There was always an understanding that they’d reimburse him for every call or telegraph,” said Dodge’s son. And with one exception, everyone did.

To his parents’ dismay, Dodge left high school at 17 to join the U.S. Naval Submarine Service as a radio operator. When he returned, Dodge’s parents wanted him to attend the prestigious Phillips Andover Academy, but “he didn’t want any part of that,” recalled his daughter, Anne Dodge Middleton. “He’d been with a bunch of men during the war, and he didn’t want to go back to kids.” So in 1922, after an argument with his older brother, 23-year-old Joseph Brooks Dodge left Manchester, Mass., climbed into a Model-T truck with three friends and rode north. He became the hutmaster at the AMC lodge in Pinkham Notch — nicknamed “Porky Gulch” for the number of porcupines. He soon became “The Mayor of Porky Gulch.” In 1925, Dodge had just three mountain huts to check on.

Since Pinkham Notch closed in late fall, Dodge spent the first four winters “timber cruising” for a Maine lumber company — walking back and forth along a section of woods to estimate the usable lumber. Then on October 16, 1926, he was summoned to Boston to meet with the AMC Hut Committee. Thinking they might question him about finances, he brought stacks of balance sheets. But they surprised him by asking if he’d like to keep the lodge at Pinkham Notch open year-round and check for winter vandalism at the other huts. Dodge agreed on the spot. He drove his old Ford, nicknamed “Azma,” back to the Notch, and Pinkham Notch Lodge — now Joe Dodge Lodge — never closed again.

His pay in those early days was $20 a week. If he wanted supplies, he strapped on skis and traveled the 22-mile roundtrip to Gorham, loaded on the return with 80-100 pounds in his rucksack. And often his preferred bathing method was to roll naked in the snow or take a dip in the icy waters of the Cutler River. Not ideal conditions to start a family, but that didn’t stop Dodge. Snowbound in February 1927, he told a fellow ham radio operator to relay his marriage proposal. “I’m lonesome as hell up here,” Dodge bellowed into his mic. “Call up Cherstine Peterson over in Cambridge. See if she’d like to come up and join me.” When she accepted, Dodge sent back an order for her to pick up an engagement ring.

After a wedding in Boston on October 26, 1927, Dodge and his new bride were trying to return from their honeymoon to Pinkham Notch. The highway at Bethel, Maine, was washed out from the destructive flood of November 3, 1927. So Dodge drove his car across a Grand Trunk Railroad trestle, managing his marriage as he would manage the huts — rigging up whatever was handy to get the job done. 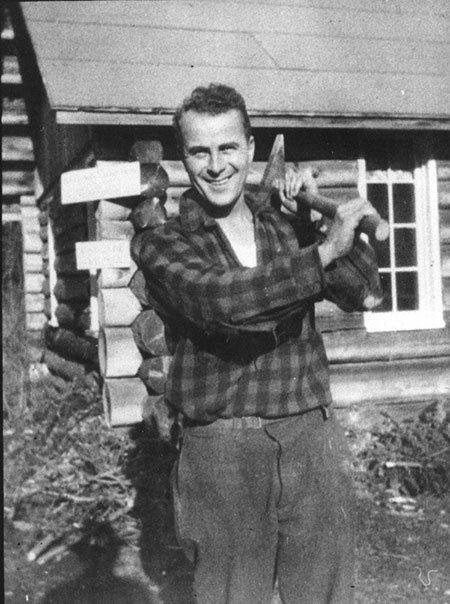 Surviving the 1927 flood, Dodge became interested in weather observing. He told the Lisbon Courier in 1966, “The heavy rains ran off the hillsides like falling from a tin roof and caused a great amount of highway and culvert damage.” A Dartmouth professor organized a network to gather precipitation data, and naturally, Dodge took charge of the effort in the North Country. He became the Weather Bureau’s official observer at Pinkham Notch, and from then to his death Dodge or his assistants provided data.

On New Year’s Day, 1928, he became AMC Huts Manager, inheriting the main building at Pinkham and four remote huts. He held that job for 31 years to the day. In 1929-1930, Dodge hauled, hammered, cussed and inspired his crew to build Greenleaf Hut, on the side of Mt. Lafayette. Over the next year, he built Galehead Hut, the most remote hut in the White Mountains, by cutting trees on Garfield Ridge. And that summer, Dodge and crew also hauled 40 tons of material up an old logging railroad bed during one of the wettest Junes in history to build Zealand Falls Hut, completing the links of eight huts in the White Mountains. Through good business sense and a paradox of hard-cussing diplomacy, Dodge finished building the huts nearly 40 percent under budget.

“Little does the casual tramper realize the days of heartbreaking labor that go into the construction of a hut above tree line,” wrote Dodge in Appalachia in 1932. Dealing with bad weather, “labor turnover” and the backbreaking effort of transporting construction materials over rocky, steep mountain trails kept him awake many nights “figuring out the morrow.”

The three new huts built between 1929 and 1931 — Greenleaf, Galehead and Zealand Falls — represented an innovation in both style and substance. Dodge was the AMC’s first in-house construction boss for such a large project, and the huts — with both kitchens and bunkrooms — were a giant leap in creature comforts from the shelters of the past. The increased luxury would prove to be a worthwhile gamble. In the process, he increased revenues from $13,000 a year when he took over to more than $100,000 a year by 1949.

More than a tough taskmaster, Joe Dodge became the prime diplomat of the White Mountains. One writer estimated that Dodge knew 2,000 people by name and had met another 250,000. The White Mountains were his love, and he wanted to introduce them to the world. He was handsome, with piercing blue eyes. Barrel-chested, Dodge had a voice that could shake snow off trees. He could entrance visitors — goofers — with fictitious stories of the spike-tailed dingmaul and the green-whiskered cumatabody. Dodge enjoyed life, and he was happy telling stories in his uniquely profane way. “His language was pretty raw,” agreed his son. “People were shocked the first time, but after that they loved it.” Beyond the standard cussing, he’d say crappertories for lavatories, Hangover for Hanover; and for a newspaper? “By gees,” Joe would say, “hand me that fishwrapper there.” Manchester-by-the-Sea, he once said on live radio, was near “Gloucester-by-the-smell.”

A scientist as well as an outdoorsman, in September 1932, Dodge and three others started the Mt. Washington Observatory, which gathered key data on extreme weather conditions, with a $400 grant from the N.H. Academy of Science. The timing was perfect. Eighteen months later, on April 12, 1934, the strongest wind in the world, 231 mph, was recorded at Mt. Washington, atop the sturdy summit weather station. In his biography Dodge said of the grant, “That was one helluva lot of money in those depression days, and it was the greatest morale boost I’ve ever had … People think of me as the AMC’s man in these parts; but, I’ll tell you that in my heart I think of myself as the Observatory’s man. I think I’ve done a damn sight more for the long-range good of humanity with the Observatory than with the Hut System.” The Observatory began 24-7 operation that year; added government grants to study jet-engine technology; and grew to 20 employees with a $1.5 million annual budget by 2005. Dodge remained managing director throughout its growth and treasurer until his death in 1973.

Between building huts and starting the observatory, Dodge also rescued countless hikers. Estimates of rescues he led or directed run to over 100. In 1949, the year Dodge turned 50, The Saturday Evening Post ran a seven-page feature, in which Dodge related his rescue technique: “My theory… is that if some damn goofer is lost, you should figure what any sensible person would do, and then look in the opposite direction.” His theory worked. Dodge had a spooky knack for rescuing hopelessly lost hikers. In one of his most famous rescues, Dodge saved the life of Harvard Egyptologist and experienced climber Jessie Whitehead. Whitehead had broken her neck and shoulder, suffered five fractures in her jaw and severe wounds on her head and neck when she and a companion fell 800 feet down Odell Gully on the side of Mount Washington. During the necessarily rough stretcher ride down the mountain, a deep cut on Whitehead’s neck hemorrhaged, so Dodge stuffed snow in the gaping hole. “It was rough,” he told the Boston Herald, “but it worked, blast it.” Which was true for many of his accomplishments.

Dodge left a legacy in skiing. The Saturday Evening Post called Dodge “the best-known winter sportsman” in 1949 and estimated that 150,000 people had made their way to Dodge’s backyard to ski Tuckerman’s Ravine. Dodge’s son Brooks went on to compete in the 1952 Olympics in Oslo, Norway.

Dodge also left a legacy with the hundreds of men and women he hired as part of the hut crew. Brooks said his dad gave “absolutely great advice.” In 1945, Dodge told his son he was going to be the hutmaster at Madison.

“But all these older guys are coming back from the service,” the 15-year-old told his dad. Six decades later, Brooks still remembers “the old man’s advice.” “Lead with your actions, and keep your damn mouth closed. You don’t lead men with your mouth. You lead them by showing them you can do a better job at anything there is.”

Dodge’s legacy continues to grow. In 2005, more than 37,000 people spent a night in one of the AMC huts. In a time when the word “legend” gets cheapened to include someone who can run with a football in the afternoon and broker a drug deal in the evening, Joe Dodge remains the quintessential Real Thing.