Kicking off the winter season in Lincoln

Loon Mountain is only three miles off I-93 on Rte. 112, which is also the main street of Lincoln. We stopped for dinner at Gypsy Café, where the menu skillfully blends cuisines around the world with various cooking styles and ingredients. Take for example my starter of tacos filled with confit of duck — who’d have thought of this Franco-Mex combo? Smoked salmon was served with horseradish crème fraîche and potstickers, which the girls shared. It came with a four-chili dipping sauce that only the teenager dared try. Entrées were just as good: grilled lamb chops with raspberry chipotle, Indian-spiced seared salmon, steak quesadilla and Gypsy’s take on Salade Niçoise with grilled yellowfin tuna.

Our suite at The Mountain Club on Loon had two big bedrooms, two baths (one with a double whirlpool tub) and a well-furnished kitchen. A deli in the lobby sold bacon, eggs and other breakfast makings, but the buffet at Seasons, right in the hotel, meant a faster start to the slopes. It also meant something for everyone — a bountiful array of eggs, apple-smoked bacon, French toast, buttermilk pancakes, granola, fresh fruit, croissants and warm muffins. The Mountain Club gives new meaning to ski-in-ski-out. We literally snapped on our skis at the door below our room and poled a few yards to the gondola. It took us, comfortably sheltered from the December wind, to the summit of Loon Peak and its “old-school” mountain trails that we love (but which I can only handle in the morning before my knee reminds me of a winter spent on crutches). After a few runs we were all ready for steaming cocoa and the view at the Summit Café.

The intermediate Haulback trail took us across to North Peak and a late lunch at the mid-mountain Camp III, a log cabin named for one of eight logging camps on Loon in the early 20th century. We ate like lumberjacks too — bowls of venison stew and sizzling bratwurst made from exotic meats (mine was antelope).

Being a morning skier, I joined the team for a ride up the Express Quad to the top of North Peak and the cruise down Sunset for spectacular views, to the top of the gondola. There we parted ways, as they took the Tote Road Quad across to South Peak, Loon’s newest terrain, and I followed an easy route back to the comforts of the base — more specifically, the Viaggio Spa. I thought I’d start a nice tradition of following a day of windburn with a facial, so opted for the spa’s Extreme Moisture Facial. My face was happier after its chocolate mask and other luxurious attentions.

By the time the skiers took the shuttle back from South Peak, the short December day had slid into night, and I had discovered that the spa facilities were open to Mountain Club guests. So we all enjoyed an après-ski swim and the whirlpool tub while we watched the groomers already at work on the snow outside.

The après-ski scene was still in full swing as we headed for Black Diamond Grill, right in the hotel. The Kids’ Club allows parents to dine at leisure while kids play and watch movies, but children in our family take too much interest in the “real” menu to be interested. And there were plenty of kids in the dining room, although it’s not specifically a “family” restaurant. The menu is based firmly on local and New England ingredients. Everyone was happy with their choices, which included Rhode Island-style calamari with aioli, buffalo chicken mac ‘n‘ cheese, ravioli with Asiago, pan-seared pork schnitzel and a shrimp-and-sausage sauté. The strudel of roasted rhubarb and strawberries was a hit with the adults; kids liked the chocolate chip cookie ice cream sandwiches. I liked the fact that their espresso machine worked. 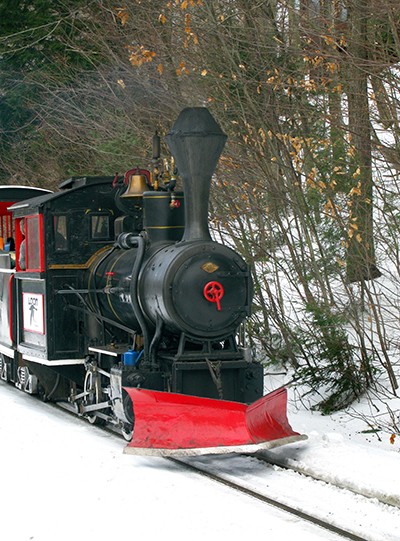 We all took the shuttle to the Pemigewasset Base Camp at South Peak for their Sunday morning omelet bar, where we started our day with custom-built omelets. One day left, and there were too many choices: more skiing, the zipline, tubing or snowshoeing. But with two adults and two kids, we didn’t all have to make the same choices, so two chose to soar 700 feet across the Pemigewasset River and then go tubing, while two took the guided snowshoe tour along the river, offered by the Adventure Center. The two-hour summit tour seemed a bit demanding for my little first-time snowshoer.

We had lunch in Lincoln at Half Baked & Fully Brewed, a tiny café where we had custom-made sandwiches, creamy deviled eggs and my favorite reason for stopping there, the Best-of-New-Hampshire Triple-Ghiradelli brownies. After lunch, we began our Christmas season with a ride on the Hobo Railroad’s Santa Express, an 80-minute trip in a restored vintage car decorated for the season and hosted by Santa himself. Even our teen enjoyed the ride, and loved watching little kids’ eyes shine at meeting Santa. The hot chocolate and cookies the elves were passing out tasted good to everyone as the train moved through the snow-covered woods alongside the Pemigewassett River. While we were in the seasonal spirit, we did a bit of Christmas shopping at one of our favorite sources of books and kids’ activities, Innisfree Bookshop.