Second lieutenant Katrina Simpson of Londonderry made history this fall when she became the first woman in the National Guard to graduate from the US Army infantry officer basic course at Fort Benning, Georgia.

Simpson was one of 10 female lieutenants in a class of 166 to qualify as an infantry officer, earning the coveted infantry blue shoulder cord after completing the intensive, 17-week combat leadership school. It was the first class to include female officers since Secretary of Defense Ash Carter announced late last year that all military occupations, including combat positions, would be open to women. Assigned as a platoon leader to the New Hampshire Army National Guard’s Milford-based mountain infantry company, Simpson returns to Fort Benning in January for the pre-selection phase of Ranger School.

At 28, she is older and more established than most of her military peers. Simpson is married and has a 4-year-old daughter. She holds a master’s degree and worked as a clinician with children suffering from post-traumatic stress disorder. She is well aware of the trailblazer moniker politicians and media will pin on her, and she has already heard from some of the naysayers who believe her pursuit is an affront to all combat arms professionals.

Her graduation took place on October 26 and was closed to the media to curtail the kind of ugly social media vitriol that plagued the coronation of three female Rangers in 2015. The day before, Simpson spoke with us about the life-altering decision she made three years ago and where she hopes it will lead her. 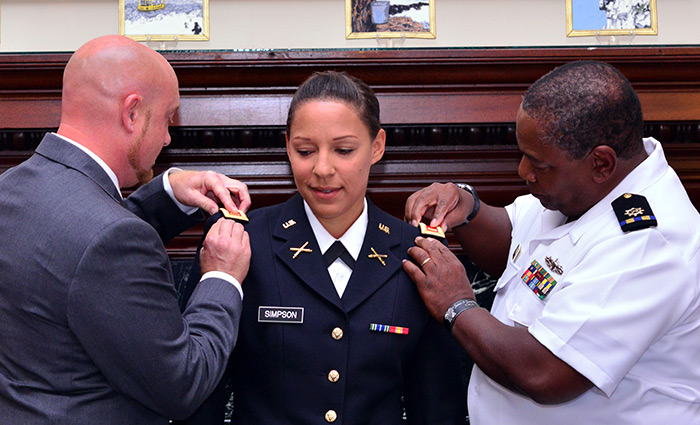 What made you decide to join the Army when you were already well on your way in life?
My dad is a retired Navy warrant officer, so I always had wanted to be in the military. I played around with the idea in college — I talked to a lot of different recruiters. I considered going enlisted, considered going the officer route and then I kind of gave up on the idea. I settled down with my husband, started a family and finished grad school. I started working as a professional, and then one day I was just kind of thinking I wasn’t satisfied. So I started looking at other options, and I don’t remember how I stumbled upon it, but the National Guard page popped up [on the web], and there was the recruiter’s information for my area. I shot her an email and she responded instantly. Two weeks later, I went to get my physical, and two weeks after that I was at basic training.

You were 25 when you went to basic training?

And then back to the New Hampshire Army National Guard and officer candidate school.

I was considering branching to medical or personnel, but as I went through officer school, I started leaning toward the idea of wanting more out of my training. I wanted to be more hands-on. I’ve had a few really great mentors along the way who encouraged me to go into combat arms. I was originally going to go with field artillery because there was an opening in the state, but then infantry opened up.

So you went for it?

How did your husband feel about it?

He wasn’t a huge fan of me joining the military in the first place, but he’s come around. He knows me well enough to realize that once I get an idea in my head, I’m probably not going to let go of it until I’ve given it my best shot. When I told him I wanted to go infantry, he was kind of like, “Yeah, I knew this was coming.” He’s been really supportive. He’s been a single dad for the last five months. He’s just an absolute rock star. He has a high-stress job as well. He’s a probation officer in Nashua, so he’s got a lot on his plate right now.

Have your classmates at Fort Benning been supportive?

I haven’t had any issues, honestly. We are broken down into squads. I’m the only
female in my squad. We’re the weapons squad, so we get to carry a lot of heavy equipment. I’m really close with the guys. We jibe really well. We trust each other. We depend on each other.

I imagine you’ve heard your share of opinions since you’ve been down there?

I’ve met captains down here in the captains’ career course who have Ranger tabs who will say, “Yeah, but I got my Ranger tab before they lowered the standards to let females through.” You’ll hear comments like that or classes ahead of us, and they’ll say, “we’re the last class before they changed the standards.”

But have they really changed the standards?

No. The standards are still the same.

Do the comments bother you?

It is what it is. I sort of expected it. At the same time, there are still a lot of males who don’t pass the standard.

Was there any part of the infantry course that was especially tough?

The hardest part for me was the academic component. I’m not a good test taker, and I don’t love the way the Army teaches new information: “We’re going to give you this class for an hour, then we’re going to give you this study guide, and tomorrow we’re going to take a test on it.” That’s always been a struggle for me. I prefer the field exercises. I’ve tried to get used to it over the last three years. Every time, I think it will be a little easier. But I do OK. To be fair, I’ve had cadre who are excellent, and then others who are strictly by the PowerPoint.

That’s a question everyone has been asking me. There are a lot of factors, but there are really three, and these aren’t in any particular order of importance. I want my daughter to know that, when she is deciding what she wants to do when she grows up, there are no limits and she can be whatever she wants to be. I feel that’s an important reason when I take a step back and realize what I’m doing here in I-BOLC [infantry basic officer leadership course] and how important it is to other women who want go down the same path. Reason number two is that I just enjoy a challenge. I like anything that is physically demanding, mentally demanding, tactically and academically demanding. Lastly, my goal as a professional is to work with combat vets, soldiers with combat-related PTSD. To me, it’s really important to understand where that PTSD comes from and to have that first-hand experience. That’s the population I want to work with.

What’s your advice for those other women who want to follow in your footsteps?

You won’t know until you try. The idea does sound scary to a lot of people. What was surprising to me were the comments written about Capt. Kristen Griest [one of the first females to graduate from Ranger School]. I had been reading about her for a long time, and the things people said [on social media] about females being in the infantry were horrible, but at the end of the day these people are sitting behind their computer screens. You know, they’re not actually out in the world. So far, I haven’t seen any of those people. Since I’ve gotten here, I’ve felt supported. I haven’t encountered any of those people and, really, they’re not even in the back of my mind anymore.