Hockey is great for all ages

Even hockey moms are taking up hockey

Ice hockey isn’t just for the youthful; it’s also for the young at heart. Like many sports, the younger you start, the better you will be, but adults who didn’t grow up honing hockey skills can still benefit from learning the sport, and many parents who have been bringing their kids to hockey practice are now beginning to take up the sport as well.

“Hockey moms are actually our fastest-growing demographic,” says Jeff Myatt, and he’s not talking about the ones who sit on the sidelines with a cup of Dunkin’. Myatt helps operate the Power Play Hockey League with locations in Hudson, Salem and Hooksett. He says recreational hockey for all ages is a trend all across New England, not just in New Hampshire.

www.usahockey.com
Everything hockey, all in one place

Shawn Connors, a hockey veteran from Ontario who played in six leagues over the course of his career, started the PPHL with the objective of developing an affordable adult hockey league for all skill levels. The league offers players a number of unique benefits through its players club membership, like their “skills and drills clinics” where members and families can develop balance, stride and edge work. Since its inception, PPHL has more than tripled in the number of teams and locations.

And there doesn’t have to be an “off season” with hockey, as the PPHL goes year-round, offering three sessions for players who want to keep frosty throughout all the seasons. Seems fitting, as their motto is, “It’s not just a sport; it’s a culture.” For more information on both adult and youth hockey coaching and league memberships, go to powerphockey.com. 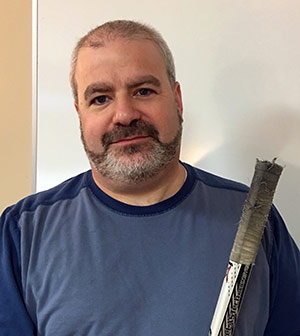 Jeff Myatt, a hockey player and coach for many years, is the vice president and marketing director of Power Play Hockey League. He uses his experiences to support the growth and development of PPHL and affiliate businesses.

How did you first get into hockey?
We had some cousins I was close to in Londonderry, and they played hockey and eventually I got handed down some gear. I played street hockey as well. I picked it up rather quickly. I wasn’t the best by any means, and I started late compared to my cousins and friends. I started around the age of 9 after having moved here from the Ohio Valley area, whereas most kids start much younger. My own son began at 3 and was in a program by the age of 4. But I quickly took to the sport and loved the pace of the game. My Christmas always came early because I would get new hockey gear prior to the start of every season in August. I got my first set of used goalie equipment in the early ’80s.

How has hockey changed since you were a kid?
Youth programs have changed quite a bit, especially with safety. They have baseline reading and concussion tests, so if there is a concern, then you get taken off the ice to be checked. The tests give the doctors and coaches the opportunity to keep an eye on the kids. I have had quite a few [concussions] myself and they can progressively get worse. It doesn’t take much to give you a concussion after you have already had one. There’s the [USA Hockey League] “Heads Up” program to protect players from sliding into the boards. There’s also a lot of emphasis on checks and certain types of hitting that are illegal.

Where do you buy equipment? Should it be a specific hockey shop?
In hockey a lot of gear is particular to the style and type of play. Some general sports shops won’t carry everything you need. If you just want to play on the pond, then you can get some skates and a stick anywhere. Mom-and-pop stores are great and are sometimes even inside the rinks [are shops] where you can get gear.

What do you like to do in the off-season?
We can enjoy year-round hockey, but I will usually take a session off. Kids can burn out, so it’s good to take breaks and do other sports. I really like softball, and we try and do a golf tournament every year and a bowling league. And we do play floor and roller hockey too.

If they are interested, and have no previous experience, is this something adults can really get into? Absolutely. You know, even now I am still learning and improving. A lot of people hate the gym as it’s not interactive, but hockey is never boring. I will do “Skills and Drills” classes and coach adults who are learning to play. These classes are designed to help players learn to handle a puck, face off, etc. It is the fastest-growing part of our program and a lot of the parents join this. They can go out with their kids and play and learn skills. Several mothers are now learning to play. We always encourage new players and adults to join.