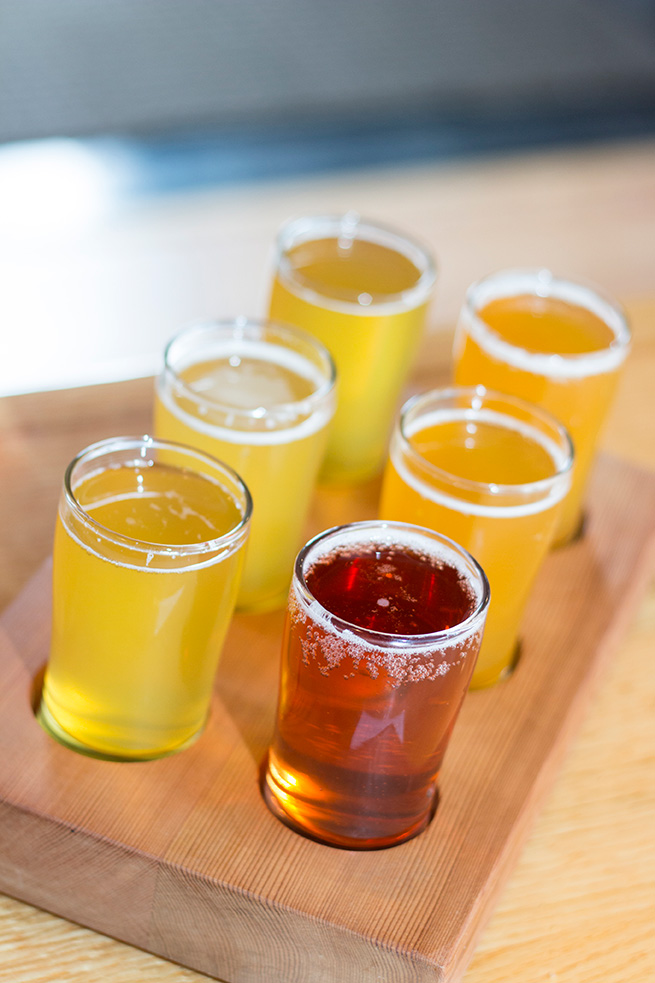 A flight of ciders at North Country Hard Cider Company

It’s apple-picking time in the Granite State, and, of course, there’ll be plenty of pie-baking, cobbler-creating and caramel-dipping. But let’s not forget the apple iteration that packs the biggest punch — hard apple cider.

It’s not an exaggeration to say the homegrown, adult beverage tamed the New Hampshire wilderness. During the Colonial years when pioneers cleared the primeval forests and the water wasn’t safe to drink, it was hard cider that fueled early settlers.

After nearly disappearing in the early 20th century, the earthy art of brewing hard cider is undergoing a renaissance, in part due to the gluten-free movement. Beer has gluten. Hard cider — nada.

In fact, according to the Beer Institute, American cider production has grown by 264 percent in the last 10 years.

But while its popularity is burgeoning, the beverage has been around for a long time. It has been enjoyed in England since before the Romans invaded. The drink remained popular during the Dark and Middle Ages and was brought to America by the Pilgrims. George Washington and Thomas Jefferson brewed it, and Abraham Lincoln offered it in the tavern he owned before becoming president. And fun fact: Johnny Appleseed was madly planting the fruit for cider, not for snacking. But the popularity of beer overwhelmed the drink’s crisp refreshment in the 20th century, and cider all but disappeared during Prohibition.

“It’s so much more than beer. It’s not even comparable,” says Silas Gordon, who opened North Country Hard Cider Company in Rollinsford with his brother Ivan and buddy Ron Dixon a couple of years ago.

Woodchuck Hard Cider in Vermont sparked the US renaissance when it began marketing the drink in 1991. Two decades later, major beverage companies such as Boston Beer Company (Sam Adams), Anheuser-Bush InBev (Budweiser), Miller Coors and Heineken hopped on the bandwagon.

Gordon doesn’t have much good to say about the national brands. “For the most part, they’re overly sweet. If it doesn’t smell like apples and it doesn’t taste like apples, then I don’t have much use for it. Real hard cider has no sulfates or other chemicals. It’s drinking something that gives you a buzz and has nutritional value.”

He and his colleagues opened North Country Hard Cider Company in 2014. Their tasting room is appointed with furniture they made themselves. They now offer a revolving menu of more than a dozen ciders, some with a variety of enhancements including habaneros, lemon, pomegranate and spices.

Stephen Wood, the proprietor of Poverty Lane Orchards & Farnum Hill Ciders in Lebanon, has also been a leader in the cider renaissance. After enjoying British-style ciders on a trip to London in the 1980s, he began experimenting with heirloom apples and planting the tart varieties formerly used to make cider.

Want to learn to make cider? Check out April White’s “Apples to Cider: How to Make Apple Cider at Home.” White asked for Wood’s assistance when writing the guide, which begins with: “Cider is nothing more than apples fermented. It seems simple, until you taste the end result.”