New Hampshire businesses take on the issue of hunger with a “can do” attitude.

It came down to four choices: a moose, the state map, the “Old Man” or the M/V Mount Washington. Finally, the decision was made — it would be the Mount Washington, scaled to 14 feet long and 3 1/2 feet high.

The next step was to plan how to build it out of cans of food. Hundreds of cans. The engineers at Freudenberg-NOK — who usually devote their time and talents to sealing technologies — got to work on a design for the ship.

The company is one of 10 that, in September, took on the NH Food Bank’s “Canstruction” challenge to collect canned or packaged foods and transform them into dynamic and visually interesting structures. It’s a new activity for the Food Bank’s Hunger Action Month. Once completed, the food is distributed to those in need.

For Freudenberg-NOK, the challenge was a natural fit for the company’s engineers. And, with community outreach a central philosophy of the company, the Freudenberg staff was eager to get involved. 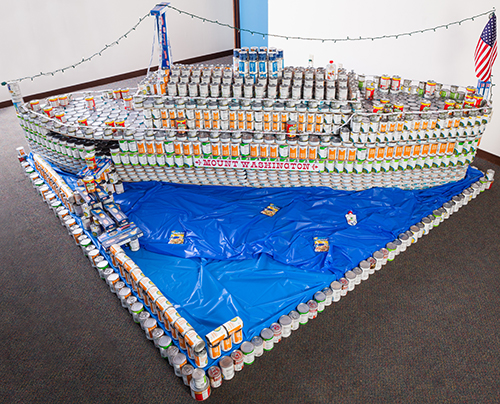 “The company is very active with community partnerships,” says Sheila Corneau, the human resources lead. “We support our communities with a lot of different efforts.”

In the ship’s design, small blue cans of tuna represented the reflection of the water on the ship’s hull, tall orange cans designated the large windows and baby food and Chef Boyardee cans symbolized the travelers aboard. The structure was built on a platform covered with a blue tarp that was manipulated to look like ripples in the water.

Although the planning took a little more than a month, the actual structure was assembled by three associates in a day and a half. “Once it started coming together, people couldn’t wait,” says Corneau.

Their efforts were rewarded by winning both the “Best in Show” and “Jurors’ Favorite” awards in the Canstruction competition.

The competition is just one of the many fundraising activities the Food Bank does. With the huge job of feeding NH people who are deemed “food insecure,” the organization has learned to do whatever it takes to get people’s attention and turn good intentions into action.

The Food Bank — a branch of Feeding America and NH Catholic Charities — is the primary provider of food to shelters, pantries and soup kitchens around the state. It partners with approximately 400 agencies to get the food to those who need it.

It doesn’t take a statistician to know that hunger is a real threat in New Hampshire. One in nine individuals is food insecure — a technical term for those who don’t know where their next meal is coming from.

“So many people are one issue away from being in this situation,” says Melanie Gosselin, executive director of the Food Bank. And, with winter approaching, the situation grows more critical as people have the added expense of heating their homes. Unfortunately, that coincides with the time the Food Bank’s supplies are low.

Gosselin says, “People are now making decisions about heating their homes, but we don’t have the inventory to be supporting those ‘heat or eat’ decisions.” 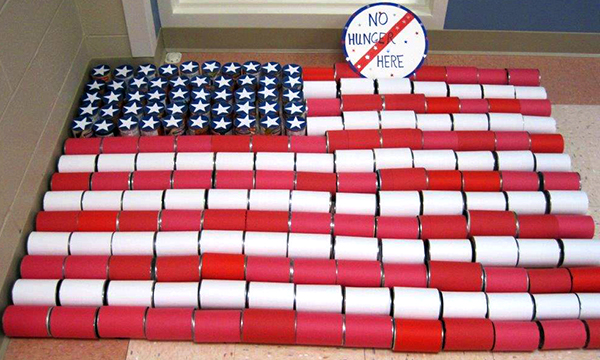 Clever entries ranged from a NH license plate by Vanasse, Hangen Brustlin to a whimsical doormat (above) by Rockingham County Nursing Home.

She encourages anyone interested in volunteering to take a tour of the Food Bank’s Manchester facility to see what part of the process they might be interested in. Whether it’s helping prune the community garden, sorting food for distribution or hosting a food drive, Gosselin says everyone can play a role in fighting hunger: “No matter your capacity, you can help your neighbor.”

Having distributed more than 8.5 million pounds of food in 2013, the Food Bank may be the Granite State’s kindest neighbor.

To learn more, donate or get information about the Food Bank, visit nhfoodbank.org.

A lot can happen in twelve hours. In September the NH Food Bank proved exactly how much with a macaroni and cheese packaging competition called the “Mac-Off.” 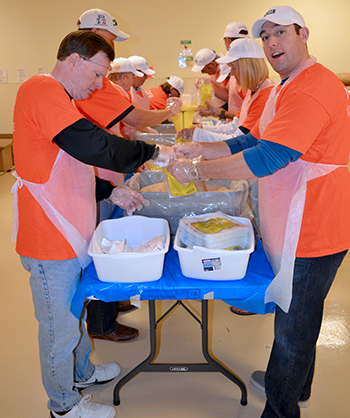 This new event for Hunger Action Month challenged 25 teams representing high schools, colleges and corporations to make as many packages of macaroni and cheese as possible. Clad in hair nets, plastic smocks and bright orange T-shirts, the 250 volunteers traded out their academic and corporate routines for a messier one.

The Mac-Off redefined the quiet, mechanical nature of the assembly line into a boisterous affair filled with cheering, singing and dancing. By the end of the allotted 12-hour time frame, 75,356 packages of macaroni and cheese had been assembled.

Whether it be the uniforms or the relay-race framework, the Mac-Off turned work into play, boosting the morale of corporate staffs that don’t often get to spend time with one another out of the office.

“You’re not in your cube,” Gosselin notes. “You’re getting to know each other.”

As a dry product with a long-lasting shelf life, macaroni and cheese serves as the perfect meal for bulk production. It only takes about 10 minutes to train someone how to package and vacuum seal it.

“We’ve done it with 8-year-olds to 80-year-olds because it’s so simple and it’s mobile,” Gosselin says.

With the dramatic amount of meals produced within a half-day time frame, Gosselin is already thinking about how to increase the numbers next year.