Randy Wilson, 36, is a soft-spoken man. By trade he’s a nuclear pipe fitter at the Portsmouth Naval Shipyard. He is also the frontman and “death growl” vocalist for his metal band Flood This Earth. Last July, he was the recipient of a transplanted heart. Beyond the quality of his medical treatment and his luck in finding the right donor, he heavily credits his rescued dog and best friend Gir for his recovery. 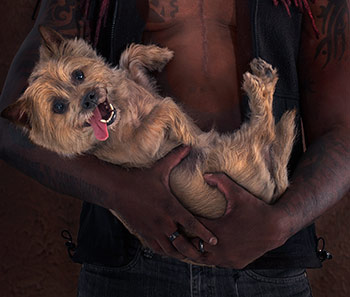 Randy Wilson isn’t the only person who feels better with a dog at his side. People in hospitals, nursing homes, hospices and other places where they might face discomfort or loneliness are finding ease in the fluff and affection of so-called “therapy dogs.” A registered nurse, Elaine Smith, started the use of therapy dogs back in 1976, when she noticed how her patients responded when a chaplain and his golden retriever visited. Since then, the demand — and the number of uses — for therapy dogs has grown.