Jackie Davis began studying mime in 1975 at age 13. Her teacher deemed her a prodigy, and by 15 she had moved to New York City to join his company, La Compagnie du Mime. She was just 16 when she began teaching mime to drama students at New York University, and in her 20s she was able to study with mime messiah Marcel Marceau. Today, from her base in Wilton, she usually performs as her clown alter ego, Mimi, but those early experiences as student and teacher of mime continue to inform her artistry and are a reminder that clowning, for all its colorful levity, requires serious dedication.

In Her Own Words: 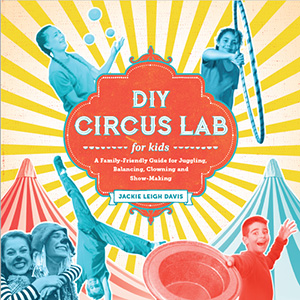 Jackie Davis is the author of “DIY Circus Lab for Kids.” It’s a family-friendly guide for juggling, balancing, clowning and show-making. The book includes a secret link to online video tutorials for beginners.

Says Davis, “My daughter Ellie is one of the clowns demonstrating the hat tricks and the little clown acts. But there’s so much more in the book. Please buy several, today! And while you’re at it, check out my website: diycircuslab.com. Shameless plug!”