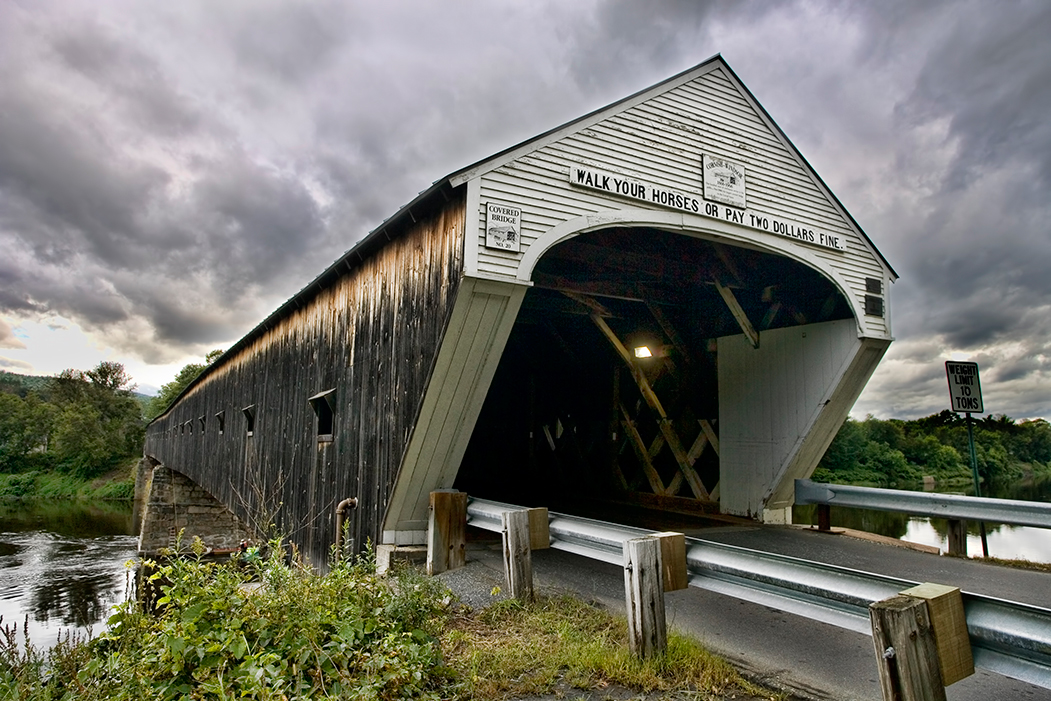 The Cornish-Windsor covered bridge is the longest such bridge in the country that still allows motorized traffic.

If you have never explored the west side of the state, then you should. Taking in the region is an adventure unto itself. This is a laid-back adventure I would do with the top down and no time constraints. I have taken most of it in behind the wheel or handlebars of something motorized. The terrain rolls around here, and there’s not a straight road anywhere. Out on Route 4 passing Eagle Pond and working your way north, you’ll see Cardigan Mountain. Route 10 will bring you right through Hanover, a beautiful New England town on the Connecticut River and home of Dartmouth College. There are tons of cool shops and great restaurants to be found. I like to eat, and I can tell you Molly’s in Hanover is great for lunch. Follow Route 12 south along the river toward Claremont. Stop at the Saint-Gaudens National Historic Site in Cornish and explore the grounds and Augustus Saint-Gaudens’ sculptures. You’ll also pass the Cornish-Windsor covered bridge, the longest covered bridge still carrying motorized traffic in the US. Come back east towards the Sunapee area by following the Sugar River along Route 103 into Newport. Stop by Salt hill Pub and have a burger. Tell Joe Tuohy I sent you, and I promise you’ll get a grin and a handshake. Cruise back into Sunapee Harbor and have an ice cream at the Quack Shack or a beer at the Anchorage. Watching the sun go down over the lake is a great way to end an adventure.

Time to choose your adventure:

Adrenaline: If it’s an adrenaline rush that you are looking for, then look no further than Mt. Sunapee’s Adventure Park. It’s 125 acres packed with fun, including a canopy zipline, aerial challenge course, climbing wall, an airbag jump and mountain biking.

Camping: Pillsbury State Park in Washington is heavily wooded with several ponds and wetlands. Hiking and biking trails crisscross the park. Tent and pop-ups only.

Hiking: Trek up Mt. Kearsarge from either side. There is parking in both Winslow and Rollins state parks. Both are relatively short but steep hikes that lead to the bald rock summit, which has excellent 360 -degree views. There is also a working fire tower at the top.

On the water: The Antique Boat Parade gathers roughly 50 wooden boats on Lake Sunapee, some of which have a wonderful history and family ties to the lake. It usually falls on the second weekend in August; this year it's on Sunday, August 13, 2017.

In the water: On Lake Sunapee, why not dive to the historic wreck of the steamship Weetamoo, scuttled in 1926. It’s in about 70 feet of water and marked by an underwater buoy and dive rope. LaPorte’s Skindiving Shop in Newbury can hook you up. Another favorite is Pollards Mills Falls on the Sugar River, which has drawn swimmers for 50+ years. Dive into the deep swirling holes if you’re highly skilled, or just sunbathe on the rocks. It’s located off of Route 10 in Newport.

Climbing: Rock climb at the Newbury cut along Route 103 in Newbury. It’s just a short drive south of the fire and police station. Two 50-foot cliffs on either side of the old train tracks offer some great 5.10s. Parking along 103 is very limited.