Welcome to the Neighborhood (Beer Company). This is, by no means, an ordinary neighborhood. Here, three men and a beer guru have perfected and advanced the art of German brewing.

“I think the beers are unlike anything you’ve tasted,” says Berwanger. “We’ve taken traditional classic German beers and we’ve done a spin on all of them. They’re just slightly different and honed specifically to the palate of the New Englander.”

Since opening its doors in September 2015, Neighborhood has grown rapidly along with its line of handcrafted ales and lagers. They already distribute to more than 40 restaurants throughout New Hampshire. But much of the success depends on a question they asked themselves prior to launching: “What would help a brewery make perfect German beer?”

Well, an award-winning and world-renowned German beer expert would do the trick, and Berwanger learned that Horst Dornbusch, the author of several books and hundreds of technical articles about beer, lived only 20 minutes away in West Newbury, Mass. The Neighborhood staff arranged a meeting with Dornbusch to see if he would be help them out with his expertise.

Dornbusch loved Neighborhood’s vision so much that he signed on as a partner and co-owner.

“I kind of slap myself everyday thinking he (Dornbusch) is a part of our team,” Berwanger says. “We wanted to do German beers and we had one of the foremost German beer experts in world living 20 minutes down the road. That’s just crazy.”

“These beers are incredibly complex to make and we are dedicated to getting them right,” Berwanger says.

Together with its intricate equipment, the Neighborhood team performs techniques like “slurry pumping” and “step mashing” by hand, allowing them to create beers that are Sessionable, not overly hoppy and malt focused. The brewery alters its process for each beer in order to excite the enzymes at the perfect moments in order to produce the flavor they want for that particular ale.

And speaking of flavorful beer, perhaps the most intriguing and popular choice at Neighborhood is one that combines its distinctive flavor and aroma with its fascinatingly original name.

Berwanger says Neighborhood’s Boss Flamingo Bronze Ale is unlike any other beer in the world. Boss Flamingo is a barley-based beer fermented with wheat beer yeast. Its recipe stems from the Dampfbier style in Germany’s Bavarian Forest, but the guys at Neighborhood took the recipe and made it their own. He explains that they imperialize the beer – using more hops and malts during the brew process – to make a modern version of Dampfbier that has “never been done before.” 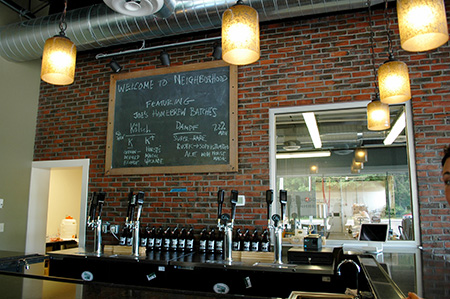 “We’ve taken that concept (Dampfbier) and really Americanized it and turned it on its head, making it perfect for the domestic beer drinker who wants to transition to craft beer,” Berwanger says.

The end result is a whirlwind in your mouth. Boss Flamingo delivers a banana-like aroma, is very malty and smooth in the middle while it also carries a nice hoppy flavor towards the end. To the nose, it offers a bouquet of sweet scents you will rarely discover with a beer of any kind. Diaz says that even people who say they aren’t beer fans have loved the Boss Flamingo.

How did Boss Flamingo get its name?

“Some people say that its fruity smell is like bubble gum, so we though pink, like a flamingo,” he says. “But a lawn flamingo doesn’t really do that beer justice,” says O’Donnell. “So we were like, ‘this is the most macho flamingo that you could ever find.’ And that’s how we eventually got to Boss Flamingo.”

Alongside Boss Flamingo, another crowd favorite at Neighborhood is the Hallowed Hammock Blond Ale. Berwanger describes Hallowed Hammock as the “gateway drug” for  those Bud Light and Miller Light drinkers who want to try craft beer. It is very light and easy to drink, but is made with the nuances of a craft brewery.

This handcrafted, full-flavored pale ale is smooth and easy going. Based on the acclaimed Kölsch beers of Cologne, Germany, Hallowed Hammock gives subtle hints of caramel, vanilla and apricot with notes of white wine.

“It’s nice to hear people say, ‘Hallowed Hammock, that’s fantastic,’” he says. “I spent a long time in the consumer products business and it’s very hard for someone to say your full product name back to you.”

The Decadent Eclipse Black Lager, a February limited release, has been outselling all other Neighborhood beers in recent weeks.

Neighborhood’s interpretation of a German Imperial Oatmeal Schwarzbier, the Decadent Eclipse is deliciously smooth with a hint of chocolaty aroma. It has a bit of roast but is not overly hoppy despite its dark color. Decadent Eclipse goes down extraordinarily quick and pairs well with food.

The brewery also makes a pair of tasty cooper ales with its Junkyard Pedigree and Trophy Mutt.

Junkyard Pedigree has a nutty-sweetness to it along with a hoppy finish. This ale is easy to drink but adds a little bite at the end.

Trophy Mutt, which is Neighborhood’s take on an Altbier from Düsseldorf, Germany, also features sweetness with a deep malty flavor. Trophy Mutt is aromatic and easy drinking like all of the beers at Neighborhood.

Customers who visit Neighborhood get to see the team in action and talk with them.

“I don’t think there is much substitute for having the people that are brewing the beer and the people who designed the recipes just hanging out,” says Diaz. “If you’re not familiar with the craft beer scene, you can sit here and talk to us about the beer and a lot of times watch us actually make the beer.”

Berwanger says there is always something interesting and exciting happening inside the brew room. And according to Berwanger, over half of Neighborhood’s customers are brand new to German beer and are experimenting with flavors they know they can’t find anywhere else.

“It’s great that people are out there experimenting with different flavors they have just never tasted before,” Berwanger says. “And they can’t find this kind of style anywhere else. That’s why we are so excited about it [the brewery]. We think we can make a real pop with this in the marketplace, and no one else is doing it like this.”

While juggling the brewing and distribution duties, the Neighborhood team is dedicated to introducing local taste buds to something different.

“We have a massively friendly staff,” Berwanger says. “All of our team is amazing and knowledgeable. People come here and have never tasted these styles before, and they can ask anyone and learn what this is all about.”