Are you craving a simpler life, the chance to slow down and savor natural beauty and make real connections with people? Tired of driving two hours each weekend just so you can be someplace relaxing?

A well-designed home in the country — whether built from scratch or renovated from an existing house — can be your dream come true. 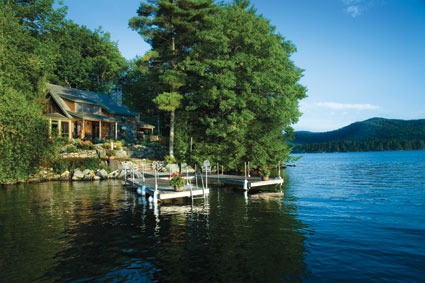 Marcia and John Zahr were no strangers to Squam Lake; the couple had vacationed there for 20 years.

All of the lake homes that John, the founder of a commercial construction company, admired were designed by Samyn-D'Elia Architects of Ashland. He told Marcia, "If I ever build a house, I'd go with them." 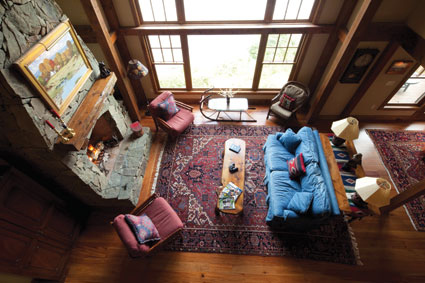 Flash forward to 2003. The couple bought a home built in the 1970s. It was tired but adequate. A new heating system and a screened porch were needed. Then the couple talked to Samyn-D'Elia. "The upshot is that we tore down the house," Marcia says. "It was a decision we never regretted."

The new house was done by the fall of 2007. As soon as the water was connected that summer, John set up an air mattress so he could be there in the morning when the crew from Twin Oaks Construction of Plymouth arrived.

The architects worked with the Zahrs to create an Adirondack-style home. They'd grown to love the style from visits to Lake Placid.

"I would describe the Adirondack style as creative but rustic," explains architect Tom Samyn, noting that materials like pine, fir, spruce and hemlock with bark were traditionally used because they were readily available. 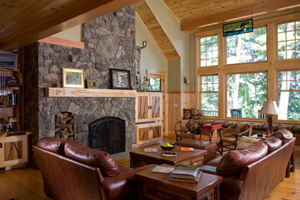 While the home's outstanding qualities abound (it won the People's Choice Award from the New Hampshire Chapter of the American Institute of Architects in 2009), one of Marcia's favorite parts is the hand-carved pine fireplace mantel. The artist depicted natural features that can be seen from the home: Squam Lake, Mt. Chocorua, Red Hills, the Squam Range and even a loon.

"We used to sit outside on the deck or dock and say, ‘How did we ever get here? It's too good to be true.‘"

Sadly, John passed away on Labor Day, 2010, at the age of 64. Marcia and her children spread some of his ashes near the home over Labor Day weekend last year. Marcia says, "It was, surely for him, ‘paradise found.'"

Judy and Gary Miller had a vision for the post-and-beam family retreat they wanted to create on property Gary's family had owned in Orford since the late 1930s. 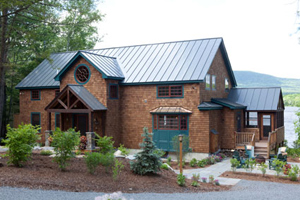 The problem was that no one in the state was building anything that reflected their dreams. Then the Millers stumbled upon the work of Yankee Barn Homes of Grantham at a home show in Hanover. The representative encouraged them to stay at the company's model home for the night. By the time the Millers breakfasted with a company designer the next day, they were ready to proceed.

Yankee Barn Homes offers several types of designs, working with clients to ensure that the resulting custom home reflects their tastes and preferences.

The Millers had many ideas they wanted to incorporate, including a two-story Palladian-style window from which they would be able to see Upper Baker Pond and Piermont Mountain from the first floor great room as well as the second floor cozy balcony. 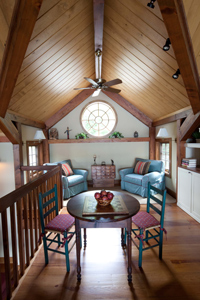 In their early 70s, the couple planned the house to accommodate potential needs. The master bedroom and bath are on the second floor. If either of them can't manage the stairs in the future, they'll convert the first-floor media room into a master bedroom. The adjacent office will become a walk-in closet and the nearby powder room, which includes a shower, will become the master bathroom. The Millers own 1.5 miles of mostly undeveloped shorefront. It's a secluded location that houses Camp Merriwood, a girl's camp the Miller family has run since 1949. DSL was hooked up last year for the Internet, an improvement over the previous satellite service, which was twice as expensive.

There's still no cell phone service, which the Millers are happy about ? especially considering all the teenage girls they host. 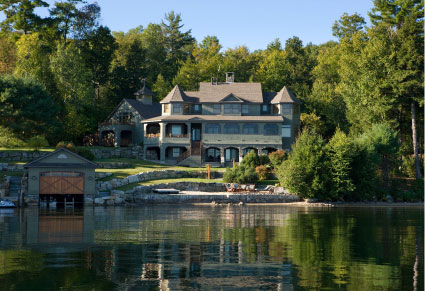 For years, Mary Larson was obsessed with finding a country place for her family that would replicate her childhood experiences at Twin Tamarack Farm Lake, a campground near Lake Pemigewasset in the Lakes Region. 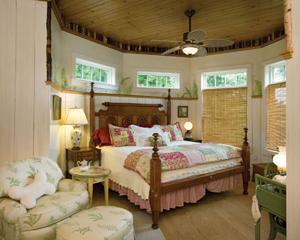 Larson's search ended in 2004 after pulling in the driveway of the Meredith home on Lake Winnipesaukee that she now owns with her husband, Don. Seeing the rusticated Adirondack-style home built by Cargill Construction of Campton was love at first sight.

In 2005 the Larsons bought the neighboring house — a soulless monstrosity — and hired Cargill to renovate it as a guest home to accommodate visits from extended family.

The project took more than a year. The blue-and-white exterior was stripped and replaced with cedar shingles in earth tones. The back porch was enclosed and the lower level supports replaced with stone columns and arches.
The interior was redone in what Larson calls a combination of Adirondack and Arts & Crafts styles, with as much wood as possible incorporated throughout. 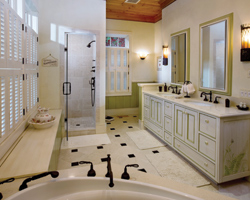 It's become the "favorite place on earth" for the extended family, who range in age from 1 to 95. Several nieces and nephews spend entire summers there. "Being with them all day, you really learn who they are. You don't get that in an hour visit here and there."

It Takes a Neighborhood 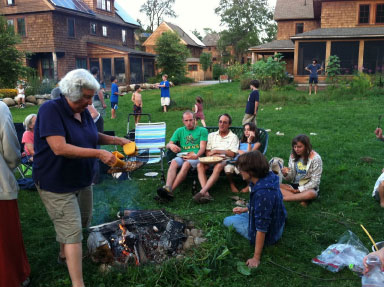 When she lived in Lexington, Mass., Ruth Smith used to imagine where she'd rather live: It would be a village where you could snowshoe from your front door. Then she'd wonder: Does such a place exist?

Smith found her country living dream in the form of Nubanusit Neighborhood & Farm in Peterborough, designed by O'Neil Pennoyer Architects of Groton, Mass., and built by Bruss Construction of Bradford.

Even though the environmentally sustainable co-housing development in the Monadnock Region met the criteria desired by Ruth and her husband, Bridges — nature, community and a slower pace — the idea of communal living made Ruth a little nervous at first.

Nubanusit Neighborhood is situated on 113 acres and consists of 29 homes of different sizes, including duplexes, quads and single-family homes. Decision-making is done by consensus and various groups meet monthly to discuss issues. 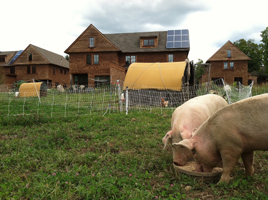 The family moved into their LEED platinum-certified, single-family home 18 months ago, and all doubts evaporated. What remains is excitement and gratitude for their improved quality of life.

Ruth, who home-schools the couple's two girls, is glad she no longer lives in a community where children are so overscheduled it might take a month to confirm a play date. Instead, Lee, 7, and Clara, 5, play with the neighborhood children in the nearby pond, hayfields and woods, albeit with walkie-talkies so they can stay in touch with their parents.

The kids are developing intergenerational relationships with neighbors, some of whom are retirees.

Bridges' greatest challenge with telecommuting for the global software company he works for was deciding where to put his desk. He needed to return to the Massachusetts office just once in the first six months after the move.

"There are things that are funny but not bad," Ruth admits. "At my first visit to the pediatrician's office, I was given a firearms safety brochure." 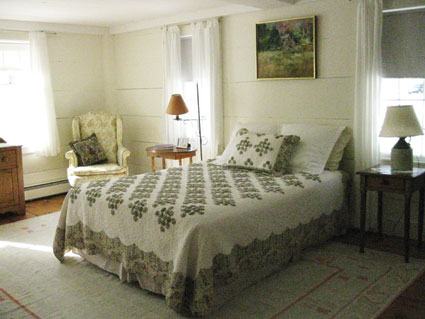 Nancy Lloyd's done a lot of living in her 67 years. Today, she runs a bed and breakfast in a 202-year-old Jaffrey home with a view of Mt. Monadnock.

Lloyd's first career unfolded in New York City, where she created theatrical costumes for nearly 30 years. She worked on and off Broadway and for "Saturday Night Live" before designing staff uniforms for special events at the Rainbow Room restaurant.

By her late 40s Lloyd decided she'd had enough. She joined the Peace Corps and lived in Tunisia from 1992 to 1994, teaching English at a small university.

She moved to New Hampshire without a job, reassured by older relatives who had already moved there that she' would "figure out something to do" when she arrived. Lloyd made the leap, prompted by fond childhood memories of her Atlantic City-based family enjoying the White Mountains in summertime.

Now in her 14th year of running a B&B, Lloyd supplements her income by teaching in Franklin Pierce University's writing program for incoming freshman, a job she loves.

Unlike many people with dreams of running a B&B, Lloyd never entertained romantic notions about it. People forget that they're the ones who will be doing the cleaning, the building maintenance and the cooking, she says.

Lloyd's advice for those who want to run a country B&B:

□ You need to be comfortable with quiet.

□ Are you OK with occasional inconvenience? You may have spotty cell phone service – or none at all. You may have slow Internet service. The nearest grocery store might be 30 minutes away.

□ Some homes are supplied with municipal water; some have their own water supply, such as a well. You will need
to have your water tested.

□ Consider emergency services. How long would an ambulance take to get to
"the sticks"?

□ Your town may not maintain your road or it may be low on the priority list.

□ Anyone who experienced the ice storm of 2008 will tell you why you need a back-up generator.

□ Career opportunities can be limited. Can you telecommute? If you decide to commute to a state like Massachusetts that has an income tax, you'll need to pay the income tax.

□ There's no income tax, sales tax or excise tax in New Hampshire, but the state has sizable property taxes. These can
vary significantly from town
to town.

□ Expect strict state regulations if you're building near water.

□ Be aware of seasonal weight limits on country roads that may prevent you from transporting building equipment and materials during cycles of freezing and thawing.

□ Social connections can take time. Many communities contain multi-generations of families who've had the same friends forever. Be patient.