Ceres Bakery Offers A Slice of the Real 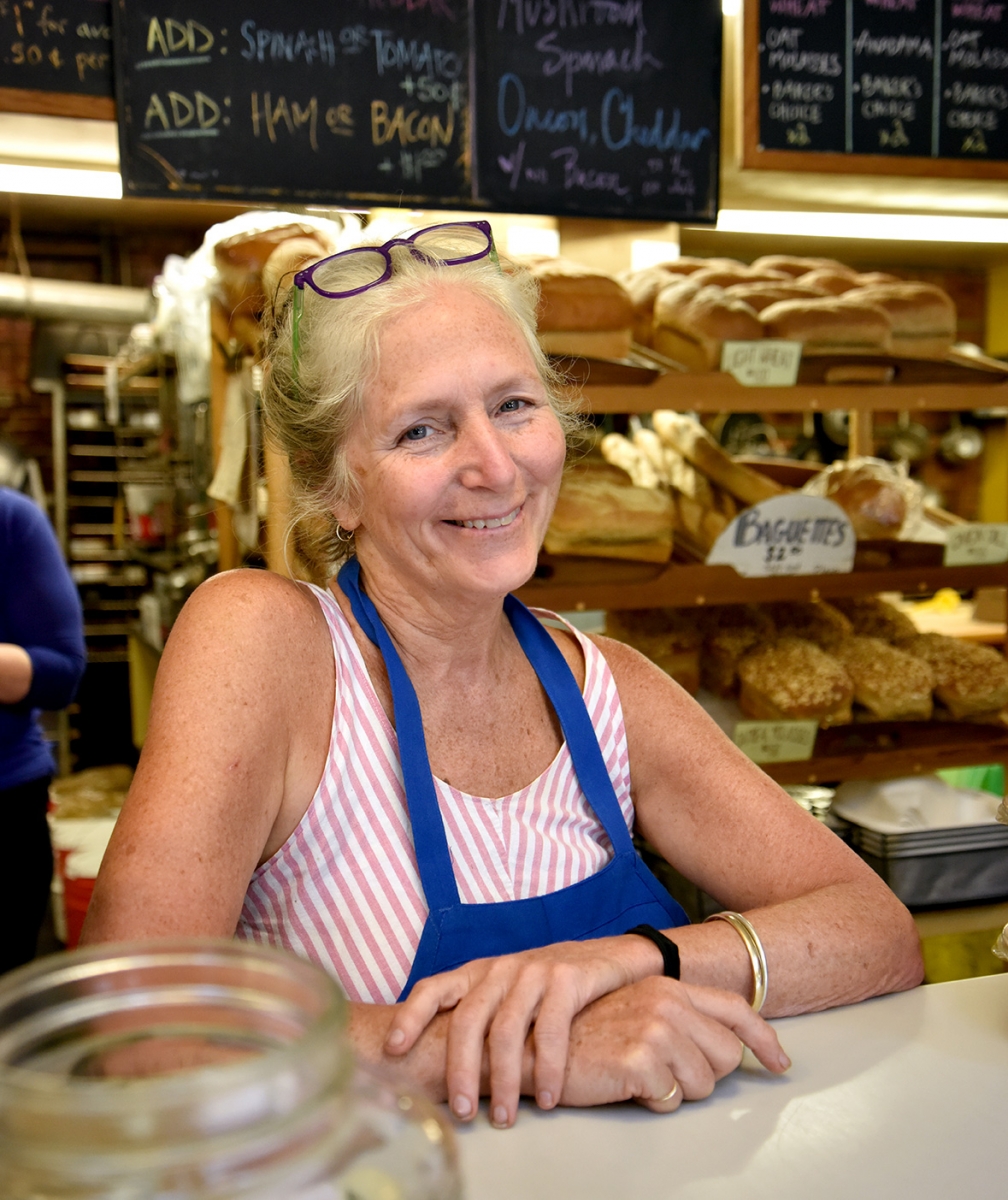 Owner Penny Brewster has built up a bakery that also plays a vital role in the Portsmouth community.

This article originally appeared in the Fall/Winter 2015 edition of The Square Magazine.

I worked at Ceres Bakery in the late ‘80s, and as I clomped through the mysterious night-morning toward my 5 a.m. shift — as I neared the building aglow with a bread baker already at work inside — I felt it, even then: a coming home. Today as I approach Ceres there’s a handwritten “help wanted” sign tacked to the door, and I’m tempted to fill out a paper bag application, as I did almost 30 years ago.

I’m not the only one with a soft spot for Ceres. If you talk about the bakery to anyone who has spent time there — in front of or behind the counter — conversation quickly veers away from the delicious home-style baked goods and into the idea of community.

Local artist Patrick Healey, a regular’s regular, is part of The Morning Customer Shift, which meets at 7 a.m. these days. He’s been coming to Ceres since 1990. He quickly points out that there are two thriving worlds. “We’re all innocent over here,” he says motioning to himself and the other seated customers. “What we want to know is what’s going on on the other side of the counter.” He nods to the workers near the oven, smiles, looks back at me. “This place is a last little slice of the real,” he says. “But you already know that.”

Steve Pesci, an urban planner at the University of New Hampshire and my old housemate, sits with me at my table as I talk to Patrick. Actually, his table — his regular table. Steve is also a member of The Morning Customer Shift. He’s been coming to Ceres for 25 years and is still upset that they no longer open at 5 a.m. “I still haven’t forgiven them for that,” he says, laughing. Then, “God, that bread slicer is so friggin’ loud.”

Patrick leans in, interrupting reassuringly, “We all love that bread machine.”

“It’s an oasis that hasn’t changed,” Steve says, eating his cranberry sunflower scone. “A planner would call this a Third Place. It’s a hub, a meet up. People don’t pull out laptops and work. There aren’t even any outlets readily available for charging. It’s a place where people talk. It exudes anti-tech. It’s such a special place. All of us who come here are very aware of that. We try not to forget it.”

The screen door slaps and squeaks as people enter, eyes turned to the packed display case. I’ve ordered a piece of cardamom coffee cake for nostalgia’s sake. A sticker in a big stack of them near the counter reads, “Eat something. You’ll feel better.” And it’s true: Ceres is all about improving your day with good food made with love. I overhear a customer ask, “Which do you like better? The lemon or the strawberry muffins?” The counterperson leans her head to one side and answers, “Hmmm. How about one of each?”

And why not get them both? Why not take a minute to say hello, to make eye contact, to nestle in at home here where there are no credit cards, no wi-fi, and no espresso?

Who created this utopia-that-could and what was she thinking? The answer is Penelope Brewster. She has been at the helm for 35 years. It started on Ceres Street proper, in 1980 in a small storefront where The Oar House’s kitchen is now located. The bakery operated there for three years before Penny bought the buildings on Penhallow Street and moved the bakery there. Penny and Anita Rosencrantz started the bakery with a simple idea: make some bread for the new restaurants opening up in Portsmouth. “Our idea was to go slow and stay under the radar,” Penny says. Naturally frugal, Penny bought equipment at auctions (remember that rumbling bread slicer?) and asked people whose businesses hadn’t made it what happened.

Penny cites Chef James Haller when asked about her biggest influence. His famous Blue Strawbery restaurant opened on Ceres Street in 1970. “Ceres was and still is the first bakery that brought us wonderful cakes and breads and croissants, and they continue to delight and amaze everyone,” Chef Haller wrote when I reached him via email. “They first opened … down the block from the Blue Strawbery, and I will never forget seeing Anita walking down Ceres [Street] with a tray filled with lemon and chocolate meringue pies.” 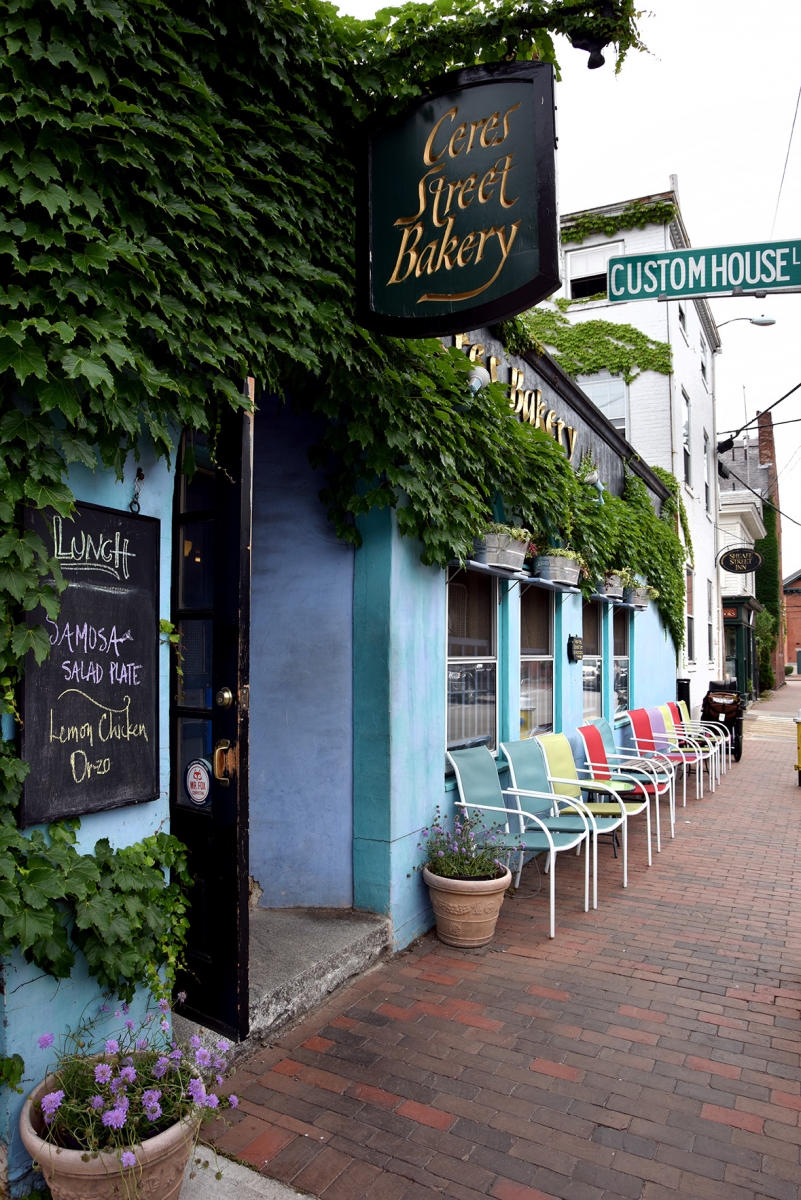 Lunch specials are always written on the outside chalkboard, sunny days will find all chairs occupied.

Although Penny is a fantastic baker, she is the first to admit that her best skill is hiring. “I try to find who I need,” she says. “A firecracker or someone calm. I can show anyone how to bake. What I need is a good crew.” Penny hires people who have rich lives outside the bakery and oftentimes liberal arts degrees under their belts: artists and musicians, historians and craftspeople. As Patrick suggested, the conversation back at the baking table can be dynamic. “I want to work with people who enjoy what they do,” Penny says. “We’re all co-workers here. There isn’t a hierarchy. There aren’t job descriptions. You write out your own application on a brown paper bag. We want people who are self-motivated and who maybe prefer chaos to order,” she says laughing. “We want people to flourish.” Penny’s very first hire, Lyn Voss, still works at the bakery. She started over at Ceres Street and moved to Penhallow and has been a pie-baking wonder ever since.

“Nothing is set,” Lyn says when we meet at the Oar House deck for a drink to talk Ceres, facing the old storefront. “Penny still hand writes orders on scrap paper,” she says, showing her bright smile. “We don’t know the lunch special ahead of time. I think that’s great. There’s a kind of feminist lifestyle behind it all. It was built organically — scheduling, the food, the community. And it happens across generations.” Lyn loves working with young people. Penny does too. “Some people stick, others fade away. But we embrace fiercely those who stay,” Lyn says. “We’re ready to fill shifts, give advice or support.” And it’s true. These women have served as big sisters to me all these years, even after I moved far away.

“There’s an ongoing curiosity for everyone who works there,” Lyn says. “There’s a kind of learning always going on. Food is just a backdrop,” She sips her cocktail. “It’s so good to see you. You know, you could put on an apron and step right back in.”