It’s quite possible that New Hampshire’s ski country — and certainly Franconia Notch — would not look quite like it does today were it not for an innovative addition to the region 80 years ago.

The Cannon Mountain Aerial Tramway this year is marking eight decades of drawing visitors to the Granite State and shuttling millions of skiers, hikers, leaf-peepers and curious visitors up and down the 4,180-foot face of Cannon Mountain.

“The Aerial Tramway was hugely important to New Hampshire,” said Jeff Leich, executive director of the New England Ski Museum. “A lift of 2,000 vertical feet covered in a matter of minutes attracted a lot of attention when there wasn’t anything like that in the country.” 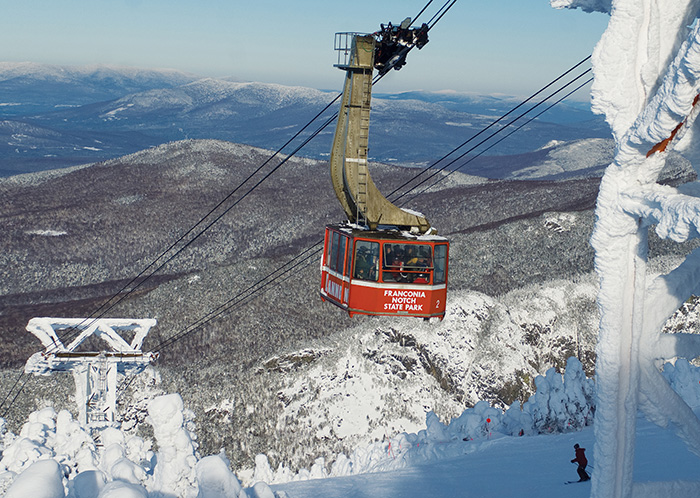 While there are a number of people attributed with bringing the idea to life, Leich said, champion skier Alexander “Alec” Bright is generally credited with getting things moving on the project in the 1930s. Bright returned from a European ski trip with the idea of bringing a tramway — several of which were in use in Europe — to the Granite State.

“He petitioned the New Hampshire legislature to build this and was quite influential in getting it done,” Leitch said.

A study was undertaken to identify the most suitable location. A list of 25 potential locations in the White Mountains was drawn up, and later narrowed down to Moosilauke and the eventual winner, Cannon. Construction took nine months and necessitated hiring a crew of nearly 50 men just to haul supplies like concrete, steel and tools up the mountain manually. A labor force made up of 200 members of the Civilian Conservation Corps went to work, completing the project in time for a June 28, 1938 dedication.

“It contributed immediately to this place becoming a full-on ski area,” Cannon Mountain and Franconia State Park Sales and Marketing Director Greg Keeler said. “They were cutting trails in the 1930s — we had the first ski racing trail in North America in 1933 — but these guys were cutting the race trails and hiking to them. As soon as we put the tramway in, it immediately became a summer destination, as well. That really opened the doors for developing it as a ski area.”

As the first of its kind in America, the tramway became a tourist attraction. Its early notoriety alone paid off economically for the region. An Austrian named Baron Hubert von Pantz came to the U.S. in the late 1930s to scout locations for a possible ski school. He gravitated to Lake Placid, New York, in part due to its notoriety following the 1932 Olympic Games. However, rain storms and gloomy weather made for a less-than-stellar stay. Von Pantz had heard of the new aerial tramway to the east, so he hired a taxi to take him from Lake Placid to Laconia, and then made his way to Franconia Notch. He was so impressed with the tramway — and the nearby property — that he bought land and built the Mittersill Alpine Resort, which sits in full view of the innovative transport and is now part of Cannon Mountain.

“They not only built a tramway,” Leich said. “They built a structure of personnel and a year-round maintenance team. They built a whole organization around it — and part of that organization was that they hired the first professional ski patrol in the country to help operate it.”

The original tramway, which was replaced in 1980, held 27 people. From its opening in 1938 until it was replaced, the original tram is said to have taken more than six million visitors to the summit of Cannon Mountain. The new tramway — two cars easily identifiable by vibrant red and yellow paint schemes and nicknamed “Ketchup” and “Mustard” — can fit as many as 80 people on-board and is three times more efficient than its predecessor. The 2.1-mile trip takes eight minutes to ascend to the top of the 4,080-foot peak — the highest in New Hampshire with the largest vertical drop of 2,180 feet. 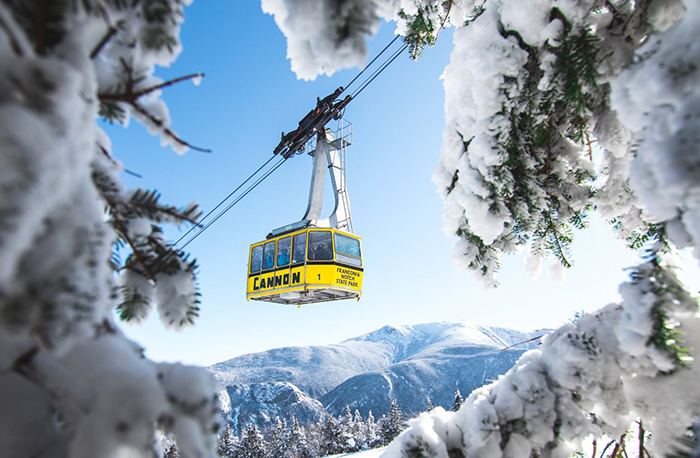 On a clear day you can see Maine, Vermont, New Hampshire, the Adirondacks in New York and Canada.

Visitors are provided an informative description of the tramway and the area by attendants who help pilot the cars up and down the mountain. As the tramway begins its ascent and the Franconia Notch Parkway shrinks below, unmatched views of the New England Ski Museum, hiking trails, Artist’s Bluff, Echo Lake and the Presidential Range reveal themselves.

“On a clear day you can see four states and Canada,” Keeler said. “You can see Maine, Vermont, New Hampshire, you can catch the Adirondacks in New York and then you can see just into Canada.”

At the top of the tramway, visitors can visit Café 4080 (“It has the highest beer taps in New Hampshire,” Keeler said.) to warm up, rest up, get something to eat and sample locally-produced beer and ales.

The tramway continues its up-and-down journey every 15 minutes.

“That’s Mount Lafayette across the way,” Keeler said. “It’s part of the Appalachian Trail, and right across the ridge — it’s like a knife-edge — with binoculars you can see people walking down the ridge line.”

“While we celebrate the past 80 years, we’re extremely proud of how far we’ve come in just the past 10,” said John DeVivo, general manager of Cannon Mountain. “From the redevelopment of the Mittersill slopes to the recent investment in a state-of-the-art, energy efficient snowmaking system, Cannon is poised for continued success well into the future.”

Part of that success and growth is directly attributable to a plan undertaken more than 80 years ago, and more recently, to the addition of a little Ketchup and Mustard.

“The tram is a New Hampshire icon,” Keeler said. “There’s only one other one in New England, at Jay Peak, but for Cannon, it’s been here since 1938 and it’s in Franconia Notch — the flagship state park. It’s just one of those things that people want to do, whether it’s summertime or wintertime. When you bring someone up here who’s not used to the mountains and there’s two and a half feet of rime ice on everything and it’s cold, and then you can go inside and there’s a restaurant and a bar — it’s a pretty great experience.”