Bird's-Eye View of A Hawk Migration

One could argue that when God created the world, he received design specifications from a committee of birdwatchers. Any bird that wants to move overland from North to South America must navigate a skinny land bridge that narrows to 50 miles in places. But instead of one bird, imagine hundreds of millions all traveling south at the same time in a coordinated avian rush hour lasting for two months, and you have a candidate for the eighth natural wonder of the world.

For the most part, bird migration is hard to see, as many species fly under the cover of darkness, while others take an ocean route. But the broad-winged hawk is an exception. It breeds across the eastern United States and north into Canada, and winters from Guatemala south to Peru and Brazil. They fly only overland and only during the day, often in large flocks called kettles, which are easily visible to the naked eye. They also follow pretty narrow flyways, or avian highways in the sky, so it is possible to camp out along the route in anticipation of their arrival, like a spectator waiting for the Tour de France to pass.

I was intrigued enough to take a weeklong trip in October of 2015 to Kekoldi, Costa Rica, where the migration can reach high six figures per day. It is one of the best places to see one of the greatest spectacles in the world. One week didn’t sate my fascination, and so a year later, I again left for Kekoldi, but instead of heading to Manchester airport for a six-hour plane ride, I jumped on my bike for a six-month pilgrimage following several tagged birds.

After securing a generous sabbatical from the Harris Center for Conservation Education in Hancock, I teamed up with Hawk Mountain, a 100-year-old hawk sanctuary and research organization in Pennsylvania that conducts research on a range of raptor species around the world. Since 2014, they have been researching the migration of broad-winged hawks, using satellite transmitters to monitor their journey south. Four birds were captured and outfitted with satellite transmitters in 2016, including Rosalie, a female that nested right on Hawk Mountain. I planned to track Rosalie with my iPhone, while my wife Tricia would track me courtesy of the Spot GPS device that she insisted I take. And so, on September 5, I got out of bed, ate breakfast, jumped on my bike and headed off in pursuit of the birds. Door to door, the journey would take me six and a half months.

For the first week, I had the pleasure of a riding companion. Richard Pendleton, a friend from Peterborough, accompanied me as far as Hawk Mountain. Part companion, part pacer, Richard was not fast enough to help me keep up with the hawks, which in the early part of their journey can travel as much as 100 miles per day.

More About the Author
www.ericmasterson.com

New England’s birds follow the Appalachians southwest toward the Gulf of Mexico, and as I followed Rosalie south, I had the opportunity to visit several hawk research sites that dot the Appalachians, including Little Gap raptor banding station in Pennsylvania. It was here that I met Becca McCabe of Hawk Mountain as she removed a flat fly from the plumage of a captured hawk. Flat flies are members of a family of parasitic flies called Hippobosidae, and live their lives tucked beneath the feathers or fur of their particular host. As we sit atop the Earth, oblivious to our annual journey around the sun, so the flat fly lives amongst the feathers of a hawk, unaware of its migration to South America each winter. I continued south from Pennsylvania, intersecting frequently with the Appalachian Trail and its band of hikers. The digital breadcrumbs left by the birds led me south through Alabama, Mississippi and Louisiana until I reached the Texas coast. By the time I reached Corpus Christi on November 25, Rosalie and her friends were already in South America, having passed through the town a full two months earlier. But Texas was kind to us both. The flat terrain, smooth roads and tailwind provided the perfect combination to push my 130-pound-loaded bike to average speeds in excess of 20 mph. And the towering thermals that helped propel a hang glider from Zapata to Lubbock in 2012, a world record distance of 475 miles, also helped power these soaring birds over increasingly greater distances.

In Houston, I took a tandem hang gliding flight to 2,000 feet to try to get a feel for their journey. The lower Texas coast is a significant bottleneck, where eastern, central and western flyways merge into a superflyway that spills over the border into Mexico. My local hawkwatch in Peterborough closed out the 2016 season with 10,530 broad-winged hawks counted. By the time the snowball reached Corpus Christi, it was a monster, with 594,222 birds tallied. 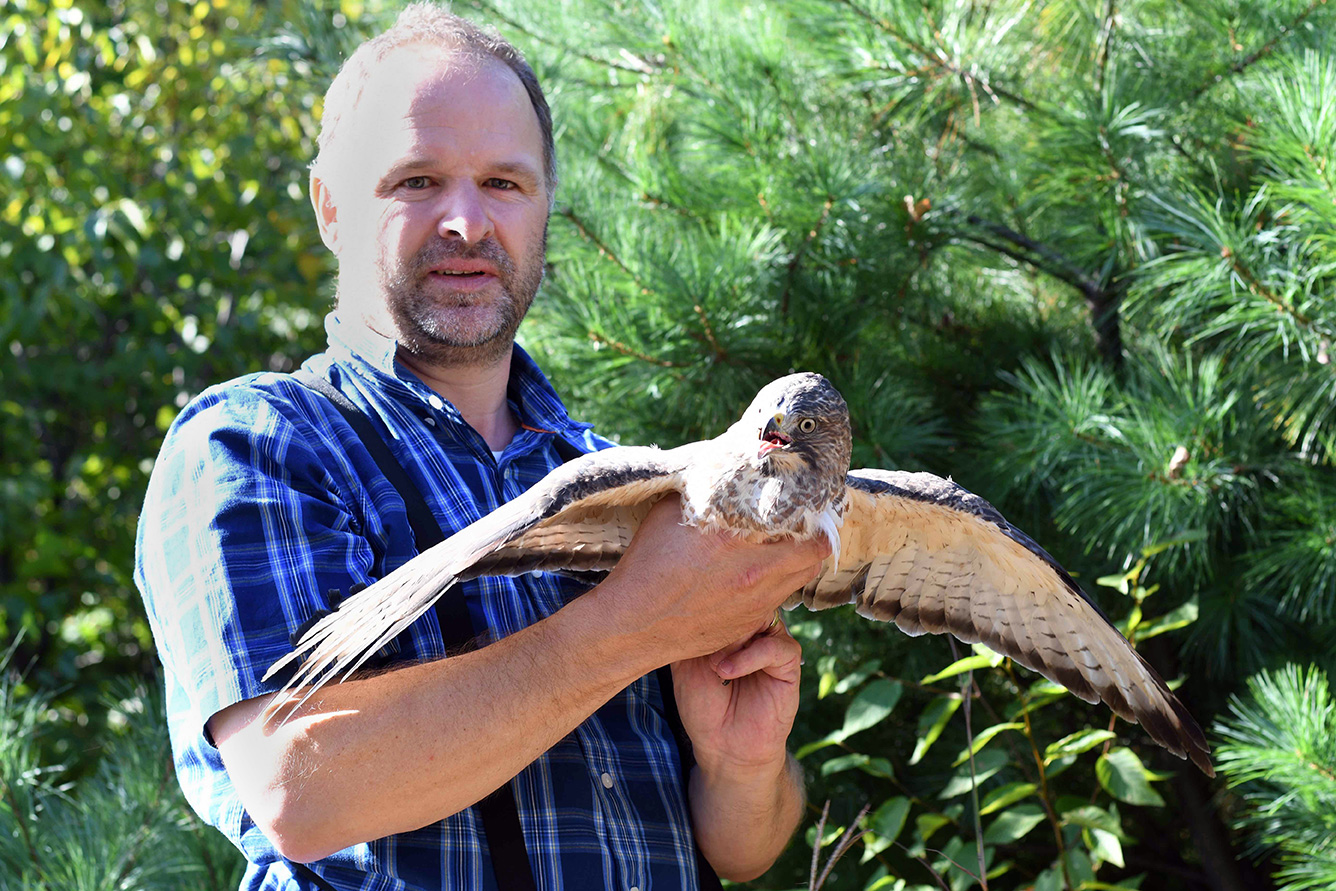 Masterson releases a hawk back into the wild at the Little Gap raptor banding station in Pennsylvania.

I started to see other changes in the avifauna (birds of a particular region), as the influence of the Central American isthmus increased with each turn of the pedal. In the 76 days it took to reach Texas, I recorded an average of 1.7 species of birds per day for a grand total of 126 species. In the 23 days I took to cycle across Texas to the Mexican border, the rate jumped to 3.7 species per day. And the birds started to take on a tropical flavor, with green jays replacing blue jays, and the plain chachalaca replacing the American turkey. Other changes were cause for anxiety, and as Spanish began to replace English, I felt a knot rise in my throat. I had managed to subordinate the fears that so many people projected onto my journey, but my wife heard an NPR story about traveling the border state of Tamaulipas, where there’s a road dubbed the Road of Death. I agreed that I would take the bus of life from Reynosa to Veracruz.

Perhaps anxiety got the better of me, and I came down with a virus that grounded me for 10 days, but I was fortunate to land in the Hotel Bienvenido in Cardel. The roof of the hotel, which sits in the center of this modest-sized town just outside Veracruz, is a hawkwatch site, perhaps the most famous one in the world. The counters who gather each fall had counted, by the time of my arrival, a grand total of 752,995 broad-winged hawks from the hotel’s roof. The migration here is so massive that another site has been established six miles west of Cardel — just far enough so that birds are not double counted by both counters. The combined tally by the time I arrived ran to 1,494,471, and if you include the 18 other species of vulture, hawk and falcon that use the flyway, the final number was 3,930,943.

Eric Masterson began his journey in Hancock, New Hampshire, on September 5, 2016, and finished in February, 2017 in Kekoldi, Costa Rica. The blue dots on the map are Rosalie’s path, and the red line is Masterson. The break is where he took the bus instead of the “Road of Death.”

I jumped back on the bike when the virus finally lifted and pedaled south into the mountains toward the Guatemalan border, stopping for two weeks in San CristÓbal de las Casas for an intensive Spanish course. With each day that passed trouble-free, my anxiety lifted a little, though I still managed to find myself in a few scrapes. Stranded late on Christmas Eve in Matias Romero with a dead iPhone, I had no means of navigation through the dark streets back to my hotel, nor could I call for a taxi. There was nowhere to charge my phone, notwithstanding the fact that electrical outlets are much less common in Mexico than in the US. My gut told me it was not safe to walk home, so I found an evening service and knelt down before the Virgin Mary to pray, and there, behind her feet, I spotted my salvation — an outlet.

The mountains could not be avoided, and in the coming days I would climb to 10,000 feet over the Alaskan Pass in Guatemala. I continued south, following the birds as best I could, past Lake Atitlán, into Honduras via the Mayan ruins at Copán Ruinas, along the eastern shore of Lake Nicaragua. I pulled into Kekoldi in southern Costa Rica in late February, 176 days after setting out from Hancock, New Hampshire. Rosalie, who passed this way on October 18, was now in Peru. While at Kekoldi I noticed a change in the heartbeat of the Earth that told me my journey was coming to an end. Rosalie was starting to drift northwards, and as I stood on the canopy tower in Kekoldi looking out toward the Atlantic Ocean, I noticed a stream of birds overhead, Mississippi Kites heading north to nesting grounds in central and eastern North America. I knew the broad-winged hawks would not be far behind.

I crossed the border into Panama for the final sprint. The wind gusted to 60 mph as I crossed the Continental Divide one last time — two oceans swapping energy across a tiny 50-mile-wide sliver of land. With time and money running low, the Panama Canal would be my last stop, but not before I lived one last metaphor that would tie our journeys together.

For the entirety of the trip, I encountered no other transcontinental bicyclists, but within the space of a couple of days, I ran into an Australian and a German cycling north from the tip of South America, a Spaniard cycling north from Peru, and a German who left the Northwest Territories in June and planned to reach Ushuaia at the southern tip of Argentina by the end of 2017. Five different species of bicyclists brought together by the geography of the Central American isthmus, just like the hawks.

I arrived home on March 16, rolling back the half-year journey in six hours, grateful for the trip of a lifetime. When I left New Hampshire, I expected that the end point, wherever it lay, would be the end point of my journey, but the hang-gliding flight in Houston awakened an idea. In May I joined a hang-gliding school in western New Hampshire, where I trained all summer and graduated with a beginner rating in October. It turns out that I’m only half way through my journey.

Eric Masterson works by day as a land specialist for the Harris Center for Conservation Education in Hancock, New Hampshire, where he runs the stewardship program for the organization’s approximately 10,000 acres of conservation easements, assists with new conservation projects and coordinates their field trip program.