A Day in the Life in NH Ski Country

Spend a day observing ski country through the eyes of those who live, work and play along the Granite State’s peaks

While most people are still asleep, snowmaking teams have been deployed across the slopes of New Hampshire’s ski country. Their nocturnal existence is a technologically-enhanced partnership with Mother Nature, each doing their part to build a deep base of snow for the skiers who will arrive in just a few hours. Snow guns need attention, conditions monitored and alterations made to finely-tuned routines – all of it designed to welcome skiers and boarders who will arrive in a few short hours looking to lay down first tracks.

6:00 a.m.  It’s still quite dark out, but Greg Kwasnik kicks the snow off his boots as he arrives at his office in Lincoln at the base of Loon Mountain. Today, Kwasnik is filling the role of snow reporter, reaching out to groomers, snowmakers and mountain ops people who have spent all night on the mountain. He’ll collect information and data and update the website, providing much-needed information for skiers looking to plan their day.

8:00 a.m.  Kwasnik finishes assembling the snow conditions report and heads out onto the mountain where he’ll shoot photos and video of the conditions before heading back inside to upload it all to Facebook, Twitter and Instagram. “It’s important to get that information out to people fast,” he says.

9:30 a.m.  Just off I-89 in Enfield, skiers gliding off the summit chair are getting a look at newly-improved trails at Whaleback Mountain. The Whaleback crew toiled through the summer and fall, clearing saplings and trees and showing new love to old favorites Jawbone, Blowhole and Jonah’s Revenge.

11:00 a.m.  Just 15 minutes away in Grantham, a group of skiers has gathered outside the ski pro shop at Eastman Cross Country for the weekly Thursday morning social ski. Hosted by a team of ski hosts, the group prepares to head out onto Lazy Loop for a 30-minute workout before returning to the recently-renovated golf and ski pro shop for a cup of coffee. An intermediate group will trek out onto Brook Trail for a slightly longer route.

Noon  The first round of lessons at Gunstock Mountain have wrapped up, and many of the skiers and boarders heading up on the Panorama lift have found their way to the Panorama Pub at the top of the mountain. The growing group grab a light bite by the fire in the main hall and enjoy the unmatched views of Lake Winnipesaukee below. 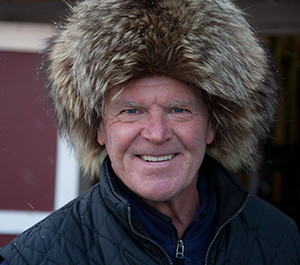 1:00 p.m.  A gentleman picks his way through the skiers outside the Waterville Valley base lodge as they hurry back up onto the mountain after a quick lunch. He takes a deep breath and begins to sing. All heads turn as the majestic voice of Vladimir Popov fills the resort. A former professional opera singer who has performed in the most prestigious concert halls around the world, Vlad’s is a familiar and welcome face to Waterville regulars – and his voice even more so. When not singing, he’ll spend part of his day in lift operations and maybe some of it at ski-check.

3:30 p.m.  Ross Boisvert, president and general manager at McIntyre Ski Area, in Manchester, walks out of the base lodge to greet the first of a fleet of school buses pulling into the lot for the weekday school ski club program. Youngsters from across southern New Hampshire pile out and head onto the slopes – with some guidance from the team of instructors, including Boisvert, who became the snow sports director in 1989. He ushers kids into the rental office and lodge and spends his afternoons “kneeling down on buckle boots and sliding kids on snow.”

5:00 p.m.  The sun dips below the horizon and as the ski towns across the Granite State blink to life, the Gypsy Café opens its doors for the dinner crowd. This Main Street Lincoln eatery fills with tired skiers, offering an eclectic, surprising menu in a dining room that bursts with the artistic color of owner Dan Duris and other local artists.

8:00 p.m.  Alexandra Moore heads to a spot just outside the base lodge at King Pines in Madison to fulfill this evening’s duties: putting out some fires and starting others. Moore helps run Cynthia’s Challenge – a 24-hour ski-a-thon to help families encountering the staggering expenses associated with medical needs. Moore will spend her time answering questions, making sure everything goes according to plan and touching off the bonfire that will help warm skiers coming down off the trails for the annual event. 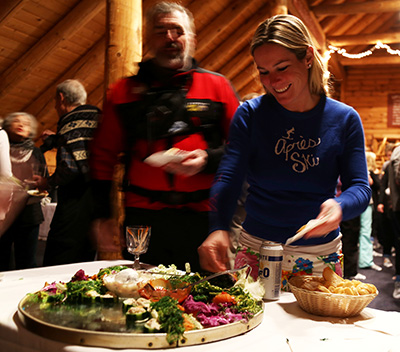 8:50 p.m.  The grooming team at Crotched Mountain is back on the slopes – prepping trails for Midnight Madness. A number of resorts have night skiing, but Crotched takes it to another level, opening trails to insomniacs and enthusiasts from 9 p.m. to 3 a.m. A live band keeps everyone moving as it grows later, and a slopeside bonfire warms those just finishing their nighttime runs.

9:00 p.m.  A line of skiers begins crisscrossing down Valley Run at Waterville Valley during Starry Nights – a once-every-few-weeks event that brings skiers, boarders and the curious together for a night of embracing the chill of a deep winter night. It’s one of several times each winter the resort celebrates with an evening of gourmet dining, music and camaraderie in Sunnyside Timberlodge. Starry Nights culminates in a visually breathtaking torch light parade down the mountain. Emergency flares and electric lights bob up and down during the descent, while grooming machines at the top fire up their lights to help illuminate the warm glow of the leisurely run.

9:20 p.m.  The first glittering trails of the fireworks display illuminate the skies over King Pines. A highlight of the yearly Cynthia’s Challenge celebration that comes in the form of a donation from Atlas Fireworks and the Bank of New Hampshire, the display reinvigorates and launches participants into the later part of the evening, where they carve, glide, board and cruise all through the night, skiing toward the sunrise. Cynthia’s Challenge has raised more than $180,000 since its inaugural ski-a-thon in 2014.

Midnight: From the southern part of the state to the northernmost reaches of the White Mountains, New Hampshire’s ski resorts grow quiet – though not entirely so. Snowmaking teams head back up the mountain to fire up their equipment: monitoring, maintaining, grooming and making preparations – all of it designed to welcome skiers and boarders who will arrive in a few short hours looking to lay down first tracks.