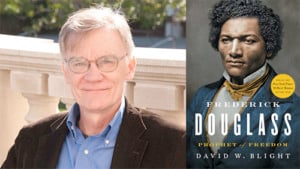 Don’t miss hearing from David Blight, the author of the Pulitzer Prize-winning biography on Frederick Douglass, the escaped slave who became the greatest orator of his day and one of the leading abolitionists and writers of the era.

In this “cinematic and deeply engaging” (The New York Times Book Review) biography, David Blight has drawn on new information held in a private collection that few other historians have consulted, as well as recently discovered issues of Douglass’s newspapers.

Frederick Douglass spoke in Portsmouth in 1862 at the Temple, which would later become the site of The Music Hall.

7 p.m. — Writers on a New England Stage event
8 p.m. — Post-show Reception begins. This reception is open to Patron-level members and up.