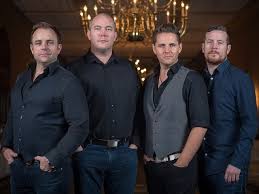 The High Kings are Finbarr Clancy, Darren Holden, Brian Dunphy and newest member Paul O’ Brien. The High Kings formed in June 2007 when Brian, Darren, Finbarr and former member Martin Furey were asked to join a brand new Irish ballad group by David Kavanagh after he had noticed a gap in the market for a band specialising in traditional Irish music.

In 2012 they performed for President Obama in Moneygall, this led to a personal invitation from the president to perform at the 2012 White House St. Patrick’s day celebration. They flew directly from London where they had already been the headline act for the Lord Mayor of London’s St. Patrick’s Day concert. In 2015 The High Kings were invited to the Pentagon as guests of General Martin Dempsey, who is the Chairman of the The Joint Chiefs of Staff. They performed alongside the US Marine Corps band marking another special occasion for the band. To celebrate the 20th anniversary of the Irish Rugby anthem Ireland’s Call the band were asked by the original composer Phil Coulter to record their own version which was subsequently included in the TV3 documentary.