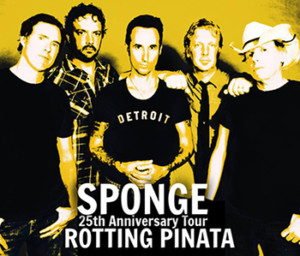 Sponge has proven to be one of the Motor City’s heaviest hitters after gaining international notoriety with their debut album “Rotting Piñata” (Sony). Emerging from Detroit with hits like “Plowed” and “Molly (16 Candles),” Sponge received massive airplay on radio stations from coast to coast and were in heavy rotation on MTV. Both “Plowed” and “Molly” hit #5 on Billboard’s Modern Rock Charts, catapulting “Rotting Piñata” to gold, and ultimately platinum status.

Sponge’s subsequent releases “New Pop Sunday,” “For All The Drugs in The World,” “The Man,” “Galore Galore” and “Destroy the Boy,” showcased the band’s swirling sonic attack, rooted in ’70s glam and of course, the Motor City influences of The Stooges, The MC5 and Motown-but still sounding distinctly like no one else.

Sponge is now touring in support of a brand new release – “Stop the Bleeding.” The full-length disc incorporates the traditional “Sponge sound” in addition to exploring edgier, industrial grooves, most apparent on the band’s twisted cover of “Time in a Bottle.”

Sponge is poised to bring its potent brand of Detroit rock to the masses, once again proving that rock never stops.