Micky Dolenz of the Monkees 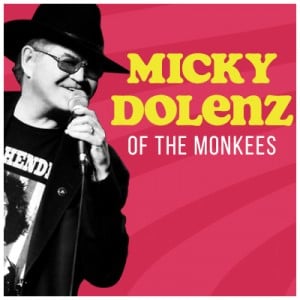 Micky Dolenz is the voice of The Monkees. The unmistakable performer that moved a generation and led this pop culture phenomena to a dozen Top 20 singles, four #1 albums and two Emmy Awards. Having entertained audiences his entire life, Dolenz brings a one-of-a-kind presence to the stage, drawing on his background in television, film broadcasting and Broadway. Original Monkee In 1965, after he auditioned with more than 400 actors for a role in a new television series, Dolenz was selected, along with Davy Jones, Michael Nesmith and Peter Tork and the Monkees were born. Their debut single, “Last Train to Clarksville,” hit number one on the charts with Dolenz on lead vocals. Actor, singer, director, producer, writer, radio DJ, inventor and all-around performer extraordinaire, Dolenz, continues to entertain audiences with Monkees’ hits “I’m a Believer,” “Pleasant Valley Sunday,” “Daydream Believer” and many more.