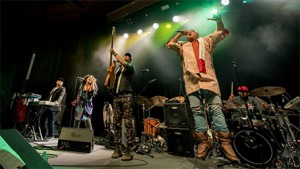 Lyrics Born relocated to the United States from his birthplace of Toyko, Japan right around the time Hip Hop was exploding on the East Coast.

Twenty-five years later, LB has obliterated the stereotypes of what an MC is “supposed to” look like and captured the hearts of countless fans who gravitate to his distinctive voice.  He’s now the only Asian-American MC to release 10 studios albums and the first to play major music festivals like Coachella and Lollapalooza.