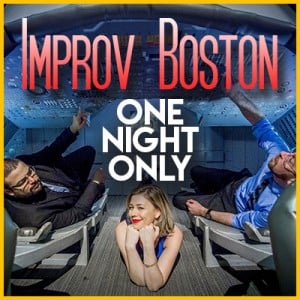 They’ve been called the “masters of comedy” by the Boston Globe and been voted “Best of Boston” by The Phoenix, The Improper Bostonian and The Weekly Dig, and their performers have included film stars, Emmy Award-winning comedians, and acclaimed producers, directors, musicians and writers. Their alumni are featured on “The Daily Show,”” America’s Got Talent,” “Funniest Wins,” “Real Time with Bill Maher,” “Last Comic Standing” and “John Oliver’s Last Week Tonight,” to name a few.

Like life, improv doesn’t have a script. This hilarious show unfolds before your eyes as everything is made up on the spot and performed in real time. ImprovBoston’s National Touring Company seamlessly integrates interactive improv games, scenes, and skillful storytelling along with off-the-cuff music with “follow-the-fun” pacing into an unforgettable performance. This show has never been seen before and will never be seen again. The best part: it’s all inspired by the audience. Let’s play!

Tickets are $29 – cabaret style floor seating and reserved seating in the balcony.

The Realities of Rural Healthcare