An Evening with Bruce Hornsby and yMusic 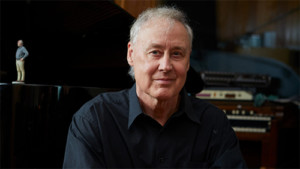 Bruce Hornsby, the creatively insatiable pianist and singer-songwriter from Williamsburg, Virginia, has always succeeded on his exceptional gifts, his training, and his work ethic. He became a global name in music by reimagining American roots forms as songs that moved with the atmospheric grace of jazz. “The Way It Is” defined sonic joy on the radio, however as a hit record it also evidenced a thrilling restructuring, and during the years afterward Hornsby, in staggeringly diverse ways, has kept going.

He has returned to traditional American roots forms, collaborating with Ricky Skaggs. He has played with the Grateful Dead. He has fused the plunk and dazzle of twentieth-century modernist classical composition to singer-songwriter emotional inquiries. He has scored films. He has performed with symphony orchestras. If the sound of an arrogant air-conditioner or a stretch of rude playing caught his ear, he has entered the hallowed doors of the conservatories of punk. So when Hornsby describes Absolute Zero, his new album, as “a compendium of what I like and moves me,” don’t expect perhaps a thing or two new. Prepare for a multi-faceted ride.

This stripe of music evolution over time clearly has another member to add to its small and restless club. It’s Bruce Hornsby, a great restructuralist from the beginning and onward. Absolute Zero constitutes absolute 2019 proof. And all you need to hear it is a set of open ears.

“One way for a songwriter to invigorate a long career is to keep breaking routines, to change up methods and parameters and solve different puzzles with every album. It’s a modus operandi that has carried Bruce Hornsby from radio hits in the 1980s through bluegrass, jazz, a stint in the Grateful Dead and, lately, collaborations with a younger-generation fan, Justin Vernon of Bon Iver. “Absolute Zero,” his 21st album, is one more daring, rewarding turn in his catalog: 10 knotty, thoughtful yet rambunctious songs that juggle scientific concepts, history and human relationships.” —The New York Times

Hornsby’s new album is as melodic as his past oeuvre, most of which is from more traditional, singer-songwriter cloth, but it’s also a fascinating and absorbing peek into the veteran musician’s love of avant-garde classical, jazz and progressive rock … At this point in his career, Hornsby could easily coast on writing cozy songs and settling for that. Thankfully for us, he’s still up for an adventure.

The Realities of Rural Healthcare