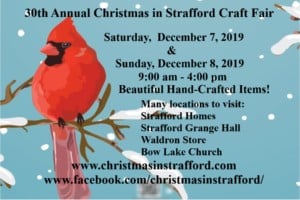 Christmas in Strafford is when the local artisans and craftspeople of Strafford, NH (and friends) open their homes and studios to the public. 26 locations are open, with 55+ crafters (local homes, along with the Bow Lake Grange Hall, Waldron Store and Bow Lake Church). Refreshments are served, and all manner of hand-crafted items are available for sale. Everything is handmade by the vendor; no re-selling is allowed!

During the event (December 7 & 8) maps can be found at: Isinglass Country Store, Uncle George’s Market, the Waldron Store and the Bow Lake Grange Hall (in the kitchen area), and the Bow Lake Church (in the Idlepines room).

This map will help you get around Strafford! Each stop is marked on the map, with a stop # and a description of their offerings. As you travel around Strafford, you will see large “Cardinal” signs with the stop # to let you know you have reached your destination. Through November, you can get a copy of the Christmas in Strafford map at the Strafford Town Hall, Hill Library, Uncle George’s Market and Isinglass Country Store, or in the November Strafford Community Calendar. Map and descriptions of each stop is downloadable on our website.