Even here in the best state in the country (our opinion, but heartfelt) cities rise and fall over time. But some places don’t take the changes lying down and choose to take charge of their futures. Like Littleton (one of a five-part series).

But, like the green plant that grows in the crevice of a rock, cities and towns, one by one, gained new life. It wasn’t easy; it took considerable resources, determined leadership and a ton of community spirit. In this special series, we profile three cities and two towns that are among the most successful: Littleton (read below), Rochester, Milford, Claremont and Laconia. 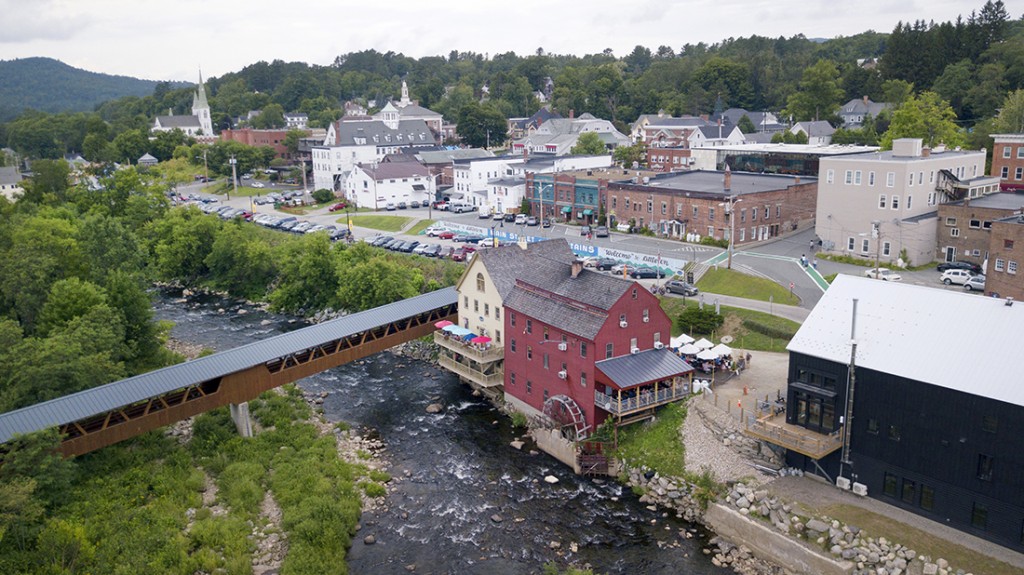 Littleton’s River District, which is home to the popular Schilling Beer Co., is just one reason why this mountain town makes the list. Photo by Joe Klementovich

Maybe Littleton took a cue from Pollyanna, the irrepressibly optimistic girl in the well-known children’s stories written by Littleton native Eleanor H. Porter. In the midst of the downtown, to mark Porter’s literary achievement, there’s a bronze statue of Pollyanna, arms flung wide, looking like she is welcoming all that is good.

And, for the 20 years the statue has stood there, there has been a whole lot of good happening and Littletonians are, well, optimistic that there will be more coming.

Not long before the statue was put in place, Littleton had become one of the first New Hampshire communities to institute the national Main Street program to help revitalize a downtown that had a 20% vacancy rate. Fast forward to today — the recent vacancy rate, the clearest measure of a town’s vitality, has been at a high of 5% and a low of 2%.

Along the way, Littleton received the honor of becoming one of only two New Hampshire towns (Milford is the other) that have been named a Great American Main Street Community, a coveted and competitive national award given by the National Trust for Historic Preservation.

Littleton is not just a vibrant Main Street with attractions like the world’s longest candy counter (112 feet!) at Chutters and entertainment at the historic Opera House; it has another trove of activity along the Ammonoosuc River, which parallels Main Street.

Among the businesses in what is called the River District, developed in recent years, is the Schilling Beer Co. in a converted 18th-century riverside gristmill, the League’s Littleton Gallery and the Riverwalk covered bridge. There’s also the Tannery Marketplace, a reconstituted 1878 tannery building, which has numerous small businesses, both retail and professional, occupying its 30,000 square feet of space.

“Littleton is an exciting place to be,” says Charles Mullen, manager of the Tannery Marketplace. “I call it the New York City of the North Country.”

That excitement is drawing a lot of young people to the town, a significant accomplishment in an aging state. It doesn’t hurt that the town is just off I-93 and close to all that the White Mountains can offer.

Five years ago, The Boston Globe described Littleton as “teetering on the edge of hipness.” Today, most agree, it’s no longer teetering.